The Nativity of the Lord

Which Christmas Mass are you going to?

When I was a child, we went to an early morning Mass — before we could see what Santa brought. Whichever celebration you choose, unless perhaps the Mass at Dawn, you know it is going to be crowded.

Everything about Christmas is sacramental, awakening the Catholicism in folks who may exhibit little interest in religiosity during most of the year. (Note the crowds at Christmas Masses and give thanks that so many people want to celebrate God’s love — even if not on a regular basis.)

Christmas invites everybody to feel at home. As we set up the nativity scenes and contemplate the characters, I suspect we often feel at most at home with the shepherds. It’s delightful to think of those folks who were just going about their business, expecting nothing more than another long night, when suddenly they became the audience for an angelic chorus. Many of us know the script because in “A Charlie Brown Christmas” Linus has taught us to repeat:

I bring unto you good tidings of great joy, which shall be to all people. For unto you is born this day in the City of David a Savior, which is Christ the Lord. And this shall be a sign unto you; Ye shall find the babe wrapped in swaddling clothes, lying in a manger.

While we gladly sing that, it’s actually a very odd image to make the centerpiece of such extraordinary celebration. Perhaps we’re charmed by specialized language like swaddling clothes and the manger. The declaration is far more dramatic than saying, “Go to a little town nearby and you’ll find a baby wearing diapers, sleeping in a feedbox.”

What a sign! A baby wearing diapers! Yet that’s the message of this feast. The Gospel of John (the reading for our Mass during the Day) gives us all the solemnity we can handle with the solemn proclamation: “In the beginning was the Word, and the Word was with God, and the Word was God. … And the Word became flesh and dwelt among us.” But that glorious declaration simply tells us that the Word of God became mortal, limited and needy. Jesus the Christ, the Word of God incarnate, needed someone to change his diapers.

We have five sets of readings for the feast of the Nativity of the Lord, including the Vigil Mass. The Gospel for the Vigil comes from Matthew, recounting the genealogy describing Jesus as a descendant of Abraham and David, then telling last Sunday’s story of Joseph’s dilemma.

The Mass during the Night begins with Isaiah’s promise that the boots that tramped battle and the cloaks rolled blood will be forgotten and the people who walked in darkness will see a great light. (Imagine how Ukrainians hear that!) Luke’s Gospel accompanies this with the story of Jesus’ birth to the homeless pilgrims, Mary and Joseph and the announcement to the shepherds. During the Mass at Dawn, we sing Psalm 97, “A light will shine on us this day,” and we hear of the shepherds’ visit to the newborn child and his parents.

Finally, in the Mass during the Day, Isaiah proclaims, “How beautiful upon the mountains are the feet of him who brings glad tidings,” and we sing, “All the ends of the earth have seen the saving power of God!” Then we hear John’s solemn proclamation that includes the terrible truth: “He came to his own, but his own people did not accept him.”

The baby creates the charm of Christmas. Babies promise a future and inspire our tenderness and protectiveness. We are awed at their fragility. The scandal of Christmas is that it reveals that this is how God comes: vulnerable and fragile, unwelcomed at home while reverenced by the poor and strangers.

All our Nativity stories include hints of the end — both the cross and resurrection, Jesus’ rejection and love’s triumph through him. Christmas reminds us that God remains among us weak and mild. The baby Jesus can represent a sweet message and also the earth-shattering revelation that God’s power is the antithesis of domination. The shepherds and Magi, Caesar and Herod, remind us that not everyone desires Emmanuel, God-with-us, and that those who reject Emmanuel will stop at nothing to carry out their plan. The coming of Christ, then and now, is what the poet William Butler Yeats called “a terrible beauty.”

Today, it is we who must incarnate the promise of peace to people of goodwill. In a world in which at least 30 nations are at war, we who flock to the manger are called and empowered to become sacraments of Emmanuel. Let us wonder at the babe and remember that we must be the body of Christ today. That’s why he came in the first place. 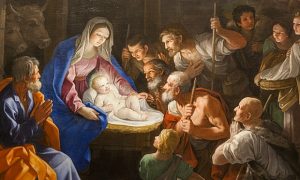 Mass during the night

The people who walked in darkness
have seen a great light;
upon those who dwelt in the land of gloom
a light has shone.
You have brought them abundant joy
and great rejoicing,
as they rejoice before you as at the harvest,
as people make merry when dividing spoils.
For the yoke that burdened them,
the pole on their shoulder,
and the rod of their taskmaster
you have smashed, as on the day of Midian.
For every boot that tramped in battle,
every cloak rolled in blood,
will be burned as fuel for flames.
For a child is born to us, a son is given us;
upon his shoulder dominion rests.
They name him Wonder-Counselor, God-Hero,
Father-Forever, Prince of Peace.
His dominion is vast
and forever peaceful,
from David’s throne, and over his kingdom,
which he confirms and sustains
by judgment and justice,
both now and forever.
The zeal of the LORD of hosts will do this!

Beloved:
The grace of God has appeared, saving all
and training us to reject godless ways and worldly desires
and to live temperately, justly, and devoutly in this age,
as we await the blessed hope,
the appearance of the glory of our great God
and savior Jesus Christ,
who gave himself for us to deliver us from all lawlessness
and to cleanse for himself a people as his own,
eager to do what is good.

In those days a decree went out from Caesar Augustus
that the whole world should be enrolled.
This was the first enrollment,
when Quirinius was governor of Syria.
So all went to be enrolled, each to his own town.
And Joseph too went up from Galilee from the town of Nazareth
to Judea, to the city of David that is called Bethlehem,
because he was of the house and family of David,
to be enrolled with Mary, his betrothed, who was with child.
While they were there,
the time came for her to have her child,
and she gave birth to her firstborn son.
She wrapped him in swaddling clothes and laid him in a manger,
because there was no room for them in the inn.

Now there were shepherds in that region living in the fields
and keeping the night watch over their flock.
The angel of the Lord appeared to them
and the glory of the Lord shone around them,
and they were struck with great fear.
The angel said to them,
“Do not be afraid;
for behold, I proclaim to you good news of great joy
that will be for all the people.
For today in the city of David
a savior has been born for you who is Christ and Lord.
And this will be a sign for you:
you will find an infant wrapped in swaddling clothes
and lying in a manger.”
And suddenly there was a multitude of the heavenly host with the angel,
praising God and saying:
“Glory to God in the highest
and on earth peace to those on whom his favor rests.”

Mass during the day

How beautiful upon the mountains
are the feet of him who brings glad tidings,
announcing peace, bearing good news,
announcing salvation, and saying to Zion,
“Your God is King!”
Hark! Your sentinels raise a cry,
together they shout for joy,
for they see directly, before their eyes,
the LORD restoring Zion.
Break out together in song,
O ruins of Jerusalem!
For the LORD comforts his people,
he redeems Jerusalem.
The LORD has bared his holy arm
in the sight of all the nations;
all the ends of the earth will behold
the salvation of our God.

Brothers and sisters:
In times past, God spoke in partial and various ways
to our ancestors through the prophets;
in these last days, he has spoken to us through the Son,
whom he made heir of all things
and through whom he created the universe,
who is the refulgence of his glory,
the very imprint of his being,
and who sustains all things by his mighty word.
When he had accomplished purification from sins,
he took his seat at the right hand of the Majesty on high,
as far superior to the angels
as the name he has inherited is more excellent than theirs.

For to which of the angels did God ever say:
You are my son; this day I have begotten you?
Or again:
I will be a father to him, and he shall be a son to me?
And again, when he leads the firstborn into the world, he says:
Let all the angels of God worship him.

But to those who did accept him
he gave power to become children of God,
to those who believe in his name,
who were born not by natural generation
nor by human choice nor by a man’s decision
but of God.
And the Word became flesh
and made his dwelling among us,
and we saw his glory,
the glory as of the Father’s only Son,
full of grace and truth.
John testified to him and cried out, saying,
“This was he of whom I said,
‘The one who is coming after me ranks ahead of me
because he existed before me.’”
From his fullness we have all received,
grace in place of grace,
because while the law was given through Moses,
grace and truth came through Jesus Christ.
No one has ever seen God.
The only Son, God, who is at the Father’s side,
has revealed him.