Devoted and determined doctor of the church

An immensely influential philosopher, theologian and jurist in the tradition of scholasticism, he is also known as the Doctor Angelicus and the Doctor Communis.

The name Aquinas identifies his ancestral origins in the county of Aquino in present-day Lazio, Italy. He was the foremost classical proponent of natural theology and the father of Thomism, in which he argued that reason is found in God. His influence on Western thought is considerable, and much of modern philosophy developed or opposed his ideas, particularly in the areas of ethics, natural law, metaphysics and political theory.

His commentaries on scripture and on Aristotle also form an important part of his body of work. Furthermore, Thomas is distinguished for his Eucharistic hymns, which form a part of the church’s liturgy.

The Catholic Church honors Thomas Aquinas as a saint and regards him as the model teacher for those studying for the priesthood, and indeed the highest expression of natural reason and speculative theology.

In modern times, the study of his works was long used as a core of the required program of study for those seeking ordination as priests or deacons, as well as for those in religious formation and for other students of the sacred disciplines (philosophy, Catholic theology, church history, liturgy and canon law).

Thomas Aquinas is considered one of the Catholic Church’s greatest theologians and philosophers. Pope Benedict XV declared, “This (Dominican) Order … acquired new luster when the church declared the teaching of Thomas to be her own and that doctor, honored with the special praises of the Pontiffs, the master and patron of Catholic schools.”

Thomas was one of the dozen greatest philosophers of the western world.

Thomas’s mother, Theodora, belonged to the Rossi branch of the Neapolitan Caracciolo family. Landulf’s brother Sinibald was abbot of Monte Cassino, the oldest Benedictine monastery. While the rest of the family’s sons pursued military careers, the family intended for Thomas to follow his uncle into the abbey — a normal career path for a younger son of southern Italian nobility.

At age 5, Thomas began his early education at Monte Cassino. In 1239, Thomas enrolled at the studium generale (university) recently established in Naples. It was here that Thomas was probably introduced to Aristotle, Averroes and Maimonides, all of whom would influence his theological philosophy. It was also at Naples that Thomas came under the influence of John of St. Julian, a Dominican preacher, who was part of the active effort by the Dominican order to recruit devout followers.

At age 19, Thomas resolved to join the recently founded Dominican Order. Thomas’s change of heart did not please his family. To prevent Theodora’s interference in Thomas’s choice, the Dominicans arranged to move Thomas to Rome, and then to Paris. However, while on his journey to Rome, per Theodora’s instructions, his brothers seized him as he was drinking from a spring and took him back to his parents at the castle of Monte San Giovanni Campano. 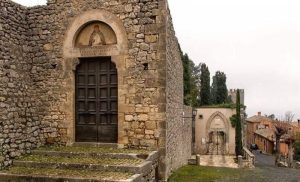 Thomas was held prisoner for almost one year in the family castles at Monte San Giovanni and Roccasecca to prevent him from assuming the Dominican habit and to push him into renouncing his new aspiration. Political concerns prevented the pope from ordering Thomas’ release, so Thomas passed this time of trial tutoring his sisters and communicating with members of the Dominican Order.

Family members became desperate to dissuade Thomas, who remained determined to join the Dominicans. At one point, two of his brothers resorted to the measure of hiring a prostitute to seduce him. According to legend, Thomas drove her away wielding a fire iron, and two angels appeared to him as he slept and strengthened his determination to remain celibate. 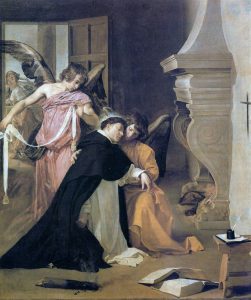 By 1244, seeing that all her attempts to dissuade Thomas had failed, Theodora sought to save the family’s dignity, arranging for Thomas to escape at night through his window. In her mind, a secret escape from detention was less damaging than an open surrender to the Dominicans. Thomas was sent first to Naples and then to Rome to meet Johannes von Wildeshausen, the Master General of the Dominican Order.

In 1245, Thomas was sent to study at the Faculty of the Arts at the University of Paris, where he most likely met Dominican scholar Albertus Magnus, the holder of the Chair of Theology at the College of St. James in Paris. When Albertus was sent by his superiors to teach at the new studium generale at Cologne in 1248, Thomas followed him, declining Pope Innocent IV’s offer to appoint him abbot of Monte Cassino as a Dominican.

Albertus then appointed the reluctant Thomas magister studentium. Because Thomas was quiet and didn’t speak much, some of his fellow students thought he was slow. But Albertus prophetically exclaimed, “You call him the dumb ox, but in his teaching he will one day produce such a bellowing that it will be heard throughout the world.”

Thomas taught in Cologne as an apprentice professor instructing students on the books of the Old Testament and writing Then in 1252, he returned to Paris to study for the master’s degree in theology.

In the spring of 1256 until 1259, Thomas was appointed regent master in theology at Paris and he wrote numerous works, including a collection of twenty-nine disputed questions on aspects of faith and the human condition[38] prepared for the public university debates he presided over on Lent and Advent; a collection of his responses to questions posed to him by the academic audience; and commentaries on the works of 6th-century Roman philosopher Boethius.

In 1259, Thomas completed his first regency and left Paris so that others in his order could gain this teaching experience. He returned to Naples where he was appointed as general preacher by the provincial chapter.

In September 1261, he was called to Orvieto; as conventual lector he was responsible for the pastoral formation of the friars unable to attend a studium generale. In Orvieto Thomas produced works for Pope Urban IV such as the liturgy for the newly created feast of Corpus Christi. Some of the hymns that Thomas wrote for the feast of Corpus Christi are still sung today, such as the “Pange Lingua” (whose penultimate verse is the famous Tantum ergo), and “Panis Angelicus.”

In February 1265, the newly elected Pope Clement IV summoned Thomas to Rome to serve as papal theologian. This same year he was ordered by the Dominican Chapter of Agnani to teach at Roman convent of Santa Sabina, founded some years before, in 1222.

The studium at Santa Sabina became an experiment for the Dominicans. Prior to this time the Roman Province had offered no specialized education of any sort, no arts, no philosophy; only simple convent schools, with their basic courses in theology for resident friars, were functioning in Tuscany during the first several decades of the order’s life. Thomas taught the full range of philosophical subjects, both moral and natural.

While at the Santa Sabina, Thomas began his most famous work, the “Summa Theologiae,” which he conceived specifically suited to beginning students: “Because a doctor of Catholic truth ought not only to teach the proficient, but to him pertains also to instruct beginners. As the Apostle says in 1 Corinthians 3:1-2, as to infants in Christ, I gave you milk to drink, not meat, our proposed intention in this work is to convey those things that pertain to the Christian religion in a way that is fitting to the instruction of beginners.”

While there he also wrote a variety of other works In his position as head of the studium Thomas conducted a series of important disputations on the power of God.

Thomas remained at the studium at Santa Sabina from 1265 until he was called back to Paris in 1268 for a second teaching regency. 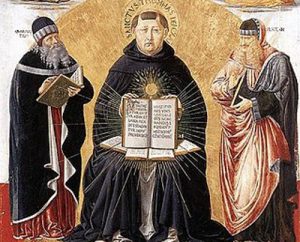 In 1268 the Dominican order assigned Thomas to be regent master at the University of Paris for a second time, a position he held until 1272. During his second regency, he finished the second part of the Summa. 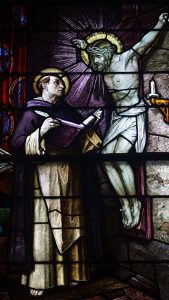 Icon of the crucifixion speaking to Thomas Aquinas is depicted
on this stained-glass window in St. Patrick Church in Columbus, Ohio.

In 1272, Thomas took leave from the University of Paris when the Dominicans from his home province called upon him to establish a studium generale wherever he liked and staff it as he pleased. He chose to establish the institution in Naples, and moved there to take his post as regent master. He took his time at Naples to work on the third part of the Summa while giving lectures on various religious topics. He also preached to the people of Naples every day in Lent, 1273. These sermons on The Commandments, the Creed, the Our Father, and Hail Mary were very popular.

It is traditionally held that on one occasion, in 1273 at the Dominican convent of Naples in the chapel of Saint Nicholas, after Matins, Thomas lingered and was seen by the sacristan Domenic of Caserta to be levitating in prayer with tears before an icon of the crucified Christ. Christ said to Thomas: “You have written well of me, Thomas. What reward would you have for your labor?”

Thomas responded, “Nothing but you, Lord.”

After this exchange something happened, but Thomas never spoke of it or wrote it down.

On Dec. 6 1273, another mystical experience took place. While he was celebrating Mass, he experienced an unusually long ecstasy. Because of what he saw, he abandoned his work. When others begged him to get back to work, Thomas replied, ” I cannot, because all that I have written seems like straw to me (mihi videtur ut palea).”

As a result, the “Summa Theologica” would remain uncompleted. What exactly triggered Thomas’s change in behavior is believed by Catholics to have been some kind of supernatural experience of God. After taking to his bed, he did recover some strength but died three months later.

Two centuries later, in 1567, Pope Pius V proclaimed St. Thomas Aquinas a Doctor of the Church and ranked his feast with those of the four great Latin fathers: Ambrose, Augustine of Hippo, Jerome and Gregory. At the Council of Trent, Thomas had the honor of having his “Summa Theologiae” placed on the altar alongside the Bible.

In his encyclical of August 1879, Pope Leo XIII stated that Thomas Aquinas’s theology was a definitive exposition of Catholic doctrine. Thus, he directed the clergy to take the teachings of Thomas as the basis of their theological positions.

Leo XIII also decreed that all Catholic seminaries and universities must teach Thomas’s doctrines, and where Thomas did not speak on a topic, the teachers were “urged to teach conclusions that were reconcilable with his thinking.”

In 1880, Saint Thomas Aquinas was declared patron of all Catholic educational establishments. 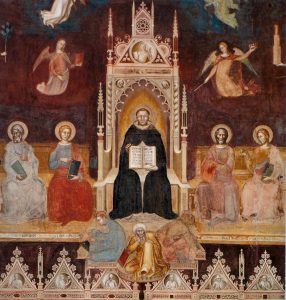 When the devil’s advocate at his canonization process objected that there were no miracles, one of the cardinals answered, “Tot miraculis, quot articulis”—”there are as many miracles (in his life) as articles (in his Summa)”.[81] Fifty years after Thomas’s death, on 18 July 1323, Pope John XXII, seated in Avignon, pronounced Thomas a saint.[82]

When he was canonized, his feast day was inserted in the General Roman Calendar for celebration on 7 March, the day of his death. Since this date commonly falls within Lent, the 1969 revision of the calendar moved his memorial to 28 January, the date of the translation of his relics to Church of the Jacobins, Toulouse.