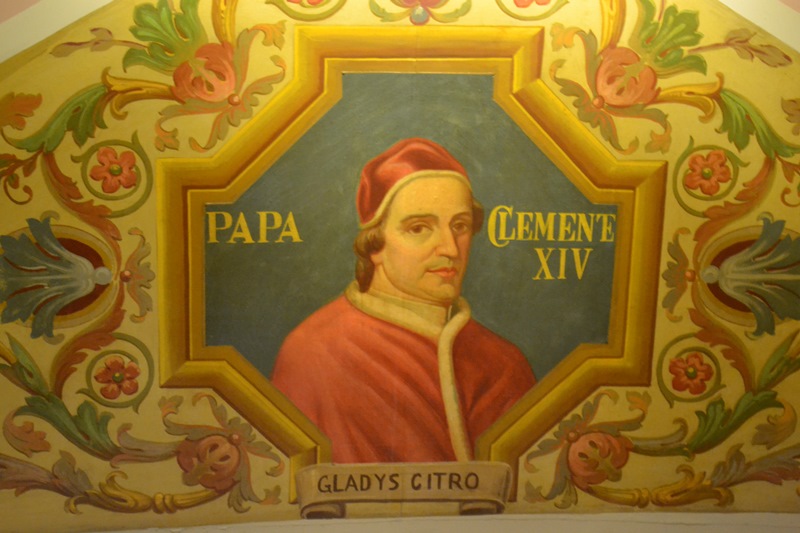 In this issue, we examine the images found in the final three cross vaults on the nave on the east side (Mohawk Street side) of our church.

FOURTH CROSS VAULT
St. Damian: Twin of St. Cosmas. By his side we see Pope Pius VIII (1761-1830 / Pope 1829). Born Francesco Xaverio Castiglione, he was schooled by the Jesuits in Osimo and later studied canon law in Bologna and Rome. He held several important posts in the church and was arrested in 1800 for refusing to pledge allegiance to the new French king of Italy. In 1816, he became a cardinal, and as early as 1823 was considered a contender for the papacy. In 1829, he was again a candidate, and after a five-week conclave was elected. As an act of conscience he made all his relatives to resign their positions in the church. It is he who established the practice that the church would only bless a wedding and a priest could actively participate in a marriage ceremony if the couple promised to give their eventual offspring a Catholic education. His last years were dominated by political tumult in Europe and the beginnings of nationalistic movements on the Italian peninsula.

St. Pascal Baylon (1540-1592). Pasquale in Italian. Born in poverty, he spent his youth as a shepherd who toted along religious books, begging passersby to teach him how to read them. In 1564 he joined the Reformed Franciscan Order as a lay brother. He preferred living in poverty because he had no expectations to leave his life-long condition of destitution. He was considered a mystic, spending nights in prayer and having ecstatic visions. Pope Leo XIII proclaimed him the Seraph of the Eucharist.

Pope Urban VIII (1568-1644 / pope 1623): Born Maffeo Barbarini to a Florentine noble family, he grew up in the household of his uncle Francesco in Rome. There, he was educated by the Jesuits and later received a Doctor of Laws from the University of Pisa. He served several positions for the Holy See and became the papal legate to the court of France. For that work he was made a cardinal-priest by the pope. He then became an important organizer and facilitator in the church. During his papacy the great Italian scientist Galileo was tried for heresy for his scientific views. Urban was criticized for the nepotism he elevated his family members in titles and riches. He outlawed slavery of South Americans and opened Asia to evangelizing by religious orders other than the Jesuits. His politics tended to favor the advancement of his particular interests and was the last pope to expand the Papal States. During his reign many artistic wonders were created to embellish the Roman landscape. It is he who ordered the dismantling of the bronze of the Pantheon to create canons and the famous “baldachino” over the high altar of St. Peter’s Basilica. This rubbed many Romans the wrong way and gave rise to the saying, “What the barbarians didn’t do to Rome was done by the Barbarini!”

FIFTH CROSS VAULT
Pope Clement XIV (1705-1774 / pope 1769): Born Vincenzo Antonio Ganganelli, he was at the time of his elevation the only Franciscan Friar in the College of Cardinals. He became a Franciscan at age 19, taking the name Lorenzo Francesco. He was asked by Pope Benedict XIV to investigate the tradition of blood libel against the Jews, and Ganganelli found it to be untrue. He became a cardinal-priest in 1759. He was chosen as pope after a four-month conclave, after heavy lobbying of European royalty that were against any Jesuits. As pope, Clement worked constantly to smooth relations among the European crowns and the church and those parties. He was amazingly adept at diplomacy given his humble beginnings. An interesting story goes that Clement XIV was so impressed by the 14-year-old Wolfgang Amadeus Mozart, upon his complete transcription of the liturgical piece “Miserere mei, Deus” after only a single hearing, that he knighted the young man who forever after could claim to be a noble. Mozart never, throughout his life, received a similar recognition.

St. John of Capistrano (1386-1456): Known as the Soldier Saint. Though a Franciscan friar, at age 70 he led a crusade against the Ottoman Turks who were besieging the city of Belgrade. He is the patron saint of jurists and military chaplains. Born in the Abruzzi town of Capistrano, he was sent to broker a peace between Perugia and Sigismondo Malatesta in 1416 and was thrown into prison by Malatesta for his efforts. During his prison time he renounced his wife and studied theology. He became a religious force for orthodoxy. His rhetoric was legend, one time preaching to a crowd of 126,000 in Brescia. He was a fanatic anti-Semite persuading many areas of Germany to expel or burn them at the stake. He represented popes and kings on diplomatic missions all over Europe.

Pope Gregory XVI (1765-1846 / pope 1831): The son of a minor noble family of northern Italy, Bartolomeo Alberto Cappellari entered religious service as a Benedictine on the island of Murano (Venice). He was a renowned theologian and linguist and became a member of the Academy of Catholic Religion. When Napoleon took Rome, Cappellari fled back to Murano, only returning after Napoleon’s defeat. Cappellari became pope after a 64-day conclave only because the front-runner, Giacomo Giustiniani, was vetoed by the king of Spain and there was a deadlock between the next two most likely candidates. Cappellari was not yet even a bishop. He chose the name Gregorio from his 20 years being the abbot of the San Gregorio monastery in Rome. As pope, he opposed innovations such as gas lighting and railroads, seeing them as invitations to commerce that would promote the bourgeoisie and liberalism, diminishing the power of the papacy. As unrest increased in the Papal States, extreme punishments were exacted on the perpetrators causing much ill will. In 1839, he issued an encyclical, “In Supremo Apostolatus,” against the Atlantic slave trade.

St. Paul of the Cross (1694-1775): The last person portrayed in this area, was from the Piemonte region of Italy. He believed that the way to find God is through the Passion of Christ. When he was 26 years old he had a vision of himself dressed in a long black habit that bore on the front an image of the heart of Jesus surmounted by a white cross. Within the heart were written the words “The Passion of Christ.” He would go on to found a community called The Poor of Jesus, and today is known as the Passionists.

SIXTH CROSS VAULT
Pope Clement XII (1652-1740 / pope 1730): Lorenzo Corsini became Pope Clement XII at age 78 after a four-month conclave. He was seen as the man to clean up the Vatican debt and clean house of the corrupt papal ministers. His mother, of the Strozzi family, made him the product of two of the most illustrious families of Florence. Due to his advanced age and blindness, he directed much of his papacy from his bed, but managed to expose those responsible for looting the Vatican treasuries, re-establish a public lottery that gave him the funds to take on some major building projects and gave restitution to those who had been robbed of their wealth through the devious acts of nefarious Vatican officials. He also was able to reunite the Greek-Malachite community with the church. He supported St. Paul of the Cross in his establishment of the Passionists. Through his efforts, 10,000 Egyptian Copts with their patriarch were reunited with the church. He died at age 88 maintaining his faculties to the end.

Clement IX (1600-1669 / pope 1667): Born Giulio Rospigliosi, he was a scholar and professor of philosophy. After having served as archbishop of Tarsus and nuncio to the Spanish court, he was living in retirement before being called back into action by Pope Alexander VII as secretary of state and cardinal-priest. Ten years later, he succeeded Alexander as pope. He was admired for his erudition, his business savvy, his charity and his affability to all. He even continued to hear confessions in St. Peter’s two days every week. He visited the sick and gave generously to the poor. He not only refused to have his name put on any buildings during his lifetime, he refused to further the personal fortunes of his family through his office. He negotiated a peace between Spain and France, admonishing Louis XIV of France against the aggressions he promulgated. Before his death he asked to be buried below the floor of Santa Maria Maggiore in Rome with a simple inscription “Clementis IX, Cineres” (Clement IX, Ashes). He was one of the most beloved of all the popes.