Utica in recent years has been blessed with connections to two local saints: Kateri Tekakwitha from nearby Auriesville, and Marianne Cope, who was a parishioner across town at then-St. Joseph Church. Both were canonized on Oct. 21, 2012, by Pope Benedict XVI.

Now, as of Oct. 9, Utica and St. Mary of Mount Carmel / Blessed Sacrament Parish are associated with another saint: Giovanni Battista Scalabrini.

Scalabrini was born on July 8, 1839, the third of the eight children of Luigi Scalabrini, a wine merchant, and his wife, Colomba Trombetta, people of modest means. As a young man he studied philosophy and theology in Como, Italy, and was ordained on May 30, 1863. He became a professor of Greek and history and eventually was named rector of St. Abundius Seminary.

In 1870, Scalabrini was appointed pastor of San Bartolomeo, one of the largest parishes in Como, where he was renowned for his work with the working class and remained forward thinking on political, social and economic issues. Having published conferences on the First Vatican Council, he earned the attention of Pope Pius IX and subsequently was named bishop of Piacenza in 1875.

The new bishop was tireless in his dedication to his flock. He made five diocesan visits to all 365 parishes in his district, even though some could be reached only on foot or by mule. Of the three synods he celebrated, one was dedicated to the Eucharist, in which he promoted frequent communion and perpetual adoration. He also reorganized seminaries and reformed their curricula.

Scalabrini tended to cholera victims, visited the sick and prisoners, helped the poor and bankrupt nobility. To help save farmers and workers from famine, he sold his horse, chalice and the pectoral cross that Pope Pius IX had given him to buy food.

His work did not stop there. The good bishop founded an institute to help hearing and speech-impaired women, organized assistance for young single women employed in rice fields, established mutual aid societies, workers’ associations, rural banks, cooperatives and Catholic Action groups. He insisted that catechism be taught in all parishes, even planning and presiding over the first National Catechetical Congress in 1889. 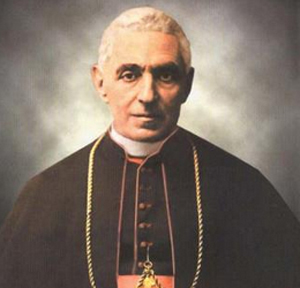 On the political front, Scalabrini helped resolve one of the biggest conundrums faced by the people of the newly united Italian State. He promoted reconciliation between that new political entity and the Papal States, which had controlled a vast swath of the central Italian peninsula. In his capacity as mediator/diplomat, he reached out to the thousands of Italians forced to migrate from their beloved Italy whom he saw in danger of losing their faith.

With the approval of Pope Leo XIII, on Nov. 28, 1887, he founded the Congregation of the Missionaries of St. Charles (Scalabrinians) for religious, moral, social and legal care of migrants. These were the very priests and missionaries who helped found our parish.

It was Scalabrini who convinced St. Frances Xavier Cabrini, the Mother of Migrants, to leave for America in 1889 to care for children, orphans and sick Italian migrants. In 1895, Scalabrini founded the Congregation of the Missionary Sisters of St. Charles for migrants. This spirituality and love for migrants inspired the Scalabrinian Lay Missionary Women.

In 1901, Bishop Scalabrini made his first voyage to North and South America to visit the missions and parishes established or served by the Scalabrinians. It was on that voyage that on Sept. 15, 1901, Scalabrini came to Utica to bless the cornerstone of St. Mary of Mount Carmel Church. Scalabrini made an additional tour of the Scalabrinian institutions in the Americas in 1904. Through his countless contributions on behalf of the children of the Italian diaspora, Giovanni Battista Scalabrini earned the appellation “Father of Migrants.”

Scalabrini died on the Solemnity of the Ascension saying: “Lord, I am ready. Let us go.” His mortal remains are venerated in the cathedral of Piacenza.

Scalabrini’s cause for beatification was introduced by Bishop Menzani at Piacenza in June 1936. On March 16, 1987, Pope John Paul II promulgated a decree recognizing him as venerable, the first step to sainthood. The required miracle was approved July 7, 1997. On the Feast of the Dedication of St. John Lateran (Nov. 9, 1997), the pope’s cathedral church, Pope John Paul II beatified Scalabrini and recalled his repeated saying: “Would that I could sanctify myself and all the souls entrusted to me.”

On Aug. 20, 2022, Cardinal Marcello Semeraro, prefect of the Dicastery for the Causes of Saints, announced that the pope set Oct. 9, 2022, as the date for the canonization of Blessed Giovanni Battista Scalabrini.

Pope Pius IX once described Scalabrini as “the apostle of the Catechism.” While speaking to members of the congregation founded by Scalabrini in October 2018, Pope Francis called upon the religious to walk with migrants, following the charisma of their founder, by paying attention to the “dignity of the human person, especially where it is most wounded and threatened.”