Chapter 1 in a series on our parish history and its artwork. Today, meet Isaiah. Coming this spring, Booz.

Once the eyes have been drawn to the apse of our church above the sanctuary, where the magnificent reproduction of the upper half of Raphael’s “Dispute of the Holy Sacrament” resides, they wander over other artistic representations around the church.

Isaia, or Isaiah in English, was one of the five major prophets of the Old Testament. Modern biblical scholars believe that there were three writers whose names have come down to us as one. Together (or singularly) they are the most influential of all the Hebrew prophets.

Isaiah’s writings (we will refer to him in the singular to avoid confusion) are cited more than any other Hebrew text in the New Testament and continue to be among the most influential to Christians everywhere, even in our own time. Isaiah called out the men of Judah for their political decisions and the women for their wicked behavior. He was harsh and he even challenged the religious order of his time.

Seven hundred years before Jesus told his first parable, Isaiah taught the Jews through his parable describing God as a vintner, tending his vines, yet disappointed by their fruit. It was an analogy that his listeners could understand — and it struck home.

The successive “Isaiahs” may have co-opted the first’s name to give their musings more gravitas. Isaiah can sometimes be zealous in his criticism of other religions (such as that of Babylon) without really understanding his targets. There is evide 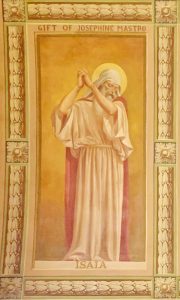 nce that one of the “Isaiahs” might have been a man named Meshullam of the house of David, and therefore a kinsman to Jesus.

The goal of Isaiah’s teaching was to exhort the Jews to faithfulness and proclaim the coming of the Messiah. He foretold many things about Jesus’ life and His Second Coming. As Isaiah’s prophecies about Christ’s life came to fruition, Christians believe his predictions about the Second Coming  also will be fulfilled.

Isaiah is a fitting character to hover over the altar as he, like John the Baptist, was a harbinger of Jesus Christ.

Sources: Staff, B. “Who Was Isaiah? Biblical Archaeology Society.” https://www.biblicalarchaeology.org/daily/people-cultures-in-the-bible/people-in-the-bible/who-was-isaiah; White, “Who is Isaiah in the Bible and Why is He Important?” Beliefnet. https://www.beliefnet.com/faiths/christianity/who-is-isaiah-in-the-bible.aspx