Above: After meeting with King Balak, Balaam and his entourage left for Moab, but God sent an angel to block his way. The donkey that the prophet was riding could see the angel, even if his master could not, and refused to move forward — three times!

Chapter 3 in a series on our parish history and its artwork. Today, meet Balaam.

Continuing our series on our parish history and art we return to the arch over the altar of sacrifice at St. Mary of Mount Carmel / Blessed Sacrament Parish.

In chapters 1 and 2, we learned about the two characters on the left of the arch. In this chapter we will delve into the story of Balaam, who appears on the right side of the arch.

Balaam was a famous prophet who lived in Mesopotamia at the time the Israelites had moved into the land of Moab on their way to Canaan. Offering a generous reward, King Balak of Moab summoned Balaam to pronounce a curse on these unwelcomed people in his kingdom. But Balaam refused to accompany Balak’s emissary back because God told him not to curse the Jews as they were blessed. The king thought his emissary had not been impressive enough to convince the prophet, so he made a second attempt sending several high-level representatives of the court with a greater reward to make his case. This time God said to Balaam, “Go with them, but do only what I tell you.”

The next day Balaam and the entourage left for Moab, but God sent an angel to block his way. The donkey that the prophet was riding could see the angel, even if his master could not, and refused to move forward — three times!

Balaam became so angry he began to beat the poor animal, but the Lord rebuked Balaam through the cries of the beast. Suddenly, the prophet was able to see the angel standing before him with sword drawn. 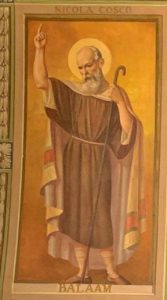 The angel said he had been ready to smite the prophet but was deterred by the donkey who recognized him. (There probably is a lesson in there about how man can be more blind to faith than animals.) The angel reminded Balaam to heed the Lord’s command and only say what God told him regarding the Hebrews.

When Balaam arrived in Moab, King Balak took him to a high place from which he was commanded to curse the Israelites. After offering 14 sacrifices on seven altars, the prophet spoke with the Lord, who pronounced a blessing on Israel. Balaam told the king, “How can I curse those whom God has not cursed? How can I denounce those whom the Lord has not denounced?”

Dissatisfied with the results, the king took Balaam to a higher place, but after the sacrifices and consultation with the Lord, Balaam came up with the same response. Balak told the prophet that if he was going to continue to bless Israel, he might as well keep quiet. Undeterred he forced Balaam to try a third time. After climbing to an even greater height, building seven new altars, and making 14 sacrifices, God spoke to the prophet who delivered a message that the king did not want to hear: “How beautiful are your tents, Jacob, your dwelling places, Israel!”

King Balak was so angry, he commanded Balaam to go home with no reward. The prophet reminded the king that he had told him he could only say what the Lord had said to him. To redeem himself in the eyes of the king, Balaam offered four prophesies, the last of which was: “A star will come out of Jacob; a scepter will rise out of Israel. He will crush the foreheads of Moab, the skulls of all the people of Sheth.”

Thus, Balaam predicted the coming of Christ. He had blessed the people of Israel and cursed the enemies of the one true God.

Balaam could have left well enough alone, but he really wanted that reward from the king of Moab. Since he could not curse Israel, he proposed a way to seduce it, recommending the Moabites tempt them with prostitutes and idolatry. In doing that, Israel would curse itself. When the Jews did succumb to the temptations laid before them, God delivered a plague and 24,000 men died.

Balaam’s name and story became infamous, and he is referred to several times in the New Testament. Peter compares false teachers to Balaam, “who loved the wages of wickedness.” Jude echoes this sentiment, associating Balaam with the selling of one’s soul for financial gain.

Finally, Jesus speaks of Balaam when He warns the church in Pergamum of their sin: “There are some among you who hold to the teaching of Balaam, who taught Balak to entice the Israelites to sin so that they ate food sacrificed to idols and committed sexual immorality.”

The image of Balaam probably was placed above our altar as another harbinger of Christ. He also is, however, a reminder to us not to give into our baser instincts. We come to Mass and Communion to ask for forgiveness for our sins during a reenactment of Jesus’ last supper, the sacrament given to us by the One whose coming Balaam announced.

Adapted by A.J. Valentini from GotQuestions.org. “Who was Balaam in the Bible”