Paul Hanley has been a fixture in the parish for many years. You’ll often seem him cantoring at the 10:30 a.m. Sunday Mass. He’s a retired educator who taught for years at Notre Dame Junior-Senior High School. He’s also written scholarly publications, given more than 200 adult education and conference presentations, traveled extensively and is a member of Mensa, the largest and oldest high IQ society in the world. But for Paul, the simple things in life – such as his marriage — are what matter the most. Here, in Paul’s own words, is what he and his life are all about.

Two items that are very important to me over the past 17 years — things that center my life — are my wonderful wife and the Tuesday night dinner.

I did not ever see myself as being married. I was 52 years old when Rosemary and I were married at the 5 o’clock Mass at Mount Carmel. We had been the cantors at the Saturday night Mass for a couple of years as part of the Music Ministry and realized that most of the people who we wanted to be at our wedding were members of Mount Carmel. It was our family. 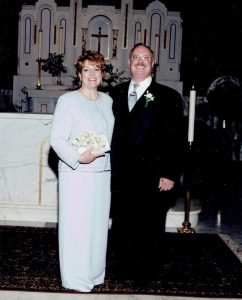 We wanted to sing at our wedding, because that is what we do — sing and pray and creatively hang about. Father Joe agreed with us and we did it.

There were two groups of people at the Mass that evening — the parishioners (the usual Saturday night crowd) who knew we were getting married, and those who were attending Mount Carmel that evening because they were involved in the Boilermaker on Sunday morning.

We were the cantors for the Mass. Bishop Tom Costello was the celebrant (a friend of mine because of my work in the Syracuse diocese for many years). After the homily we went to the middle of the altar, said our marriage vows before everyone and then returned to our places on either side of the altar. It was a unique wedding ceremony.

It continued after our wedding at our home and includes a number of friends. It is a match made in heaven. Rosemary likes to cook, I like to eat (and clean up after the meal) and a number of friends who are single have a chance to get together each week for table fellowship. We have been doing this for the past 17 years. We cherish the “Tuesday night crowd.”

The music of his life

I started singing and leading the congregation in junior high at St. John the Evangelist grade school. The father of a good friend heard me singing with his daughter in their living room, came to me and told me that I should join the choir. Then he told me to come to Mass a little bit early and meet him in the sacristy before Mass. I did.

He handed me a book of songs, told me that what I had to do was to stand up and tell the congregation where in the book the music was, and then lead the people in singing the music. I told him that he was crazy. He told me that he heard me singing a number of times at his home. He mentioned the fact that when he asked me to see him before Mass started, I responded to him, “OK, Mr. R. Whatever you need me to do.” He would not take no for an answer. So, I did what he told me to do. For the next six years, I was the cantor for the Sunday morning liturgy.

After graduation from Stonehill, I went to Bennington, Vermont, for the novitiate year, learning about the Congregation of Holy Cross, and about my relationship with God. A time of prayer, quiet and discernment. After seven months, I came to the conclusion that I was not supposed to become a priest, and I returned to Utica.

I got a job at Upstate Computer Center and then found a job with General Electric.

I guess that the best way to describe what I do with my time — “creatively hanging about.”

I have been a teacher since grade school — helping friends with school work, especially in math. I loved working one-on-one with classmates who were having difficulty in school. In high school, a group of five classmates would gather in the cafeteria to help each other with homework. We met at 7:30 each day — all of our group would be in school real early in the morning because our parents would drop us off on their way to work.

I was involved in many different after-school activities: theater, choir, basketball announcer, paper route. On weekends, I would go to the Knights of Columbus to help teach swimming to the younger kids who did not know how to swim. I played basketball at the K of C, but could not sink a basket to save my life. However, I was really good at defense. That was the only reason why the coach let me play.

I learned how to play tennis, golf, handball, swimming and diving, and card games. (My family did not spend much time watching television. We had so many other things to do.) I spent lots of time reading mystery novels: the complete Sherlock Holmes, and all the Nero Wolfe novels. I still read two or three books a week. (Barnes and Nobles loves me.)

One high point in my life in college involved the musical productions by The Greasepaint Players of Stonehill College.

We started the Greasepaint Players because the theater group at the college would not do musicals. The head of the drama department did not consider musicals to be real theater.

So a group of us decided to start our own show. I worked with this group for three seasons. In my senior year we chose “The Fantastics” as our musical for the year. I decided to try out for a part in the show and was chosen to be the girl’s father in the show. It was an awesome experience. I sang, danced, remembered my lines and had a wonderful time.

After college, I joined the Newman Center at Utica College and became one of the leaders of the music ministry for Sunday Mass.

At about the same time, I had the pleasure of meeting Flora Elacqua. She invited me to teach some adult education classes at Mount Carmel. I became a good friend of the Elacqua family. At one point, Vincent Elacqua invited me to come to Mount Carmel to sing with them at Mass. I was awestruck by what I experienced. I decided to join Mount Carmel and became a part of the music ministry. I have been here ever since.

The music ministry still is vibrant and involves so many different people – from school age to senior citizens (I guess that I am in latter group now). I am in awe of the sense of community which exists throughout the parish.