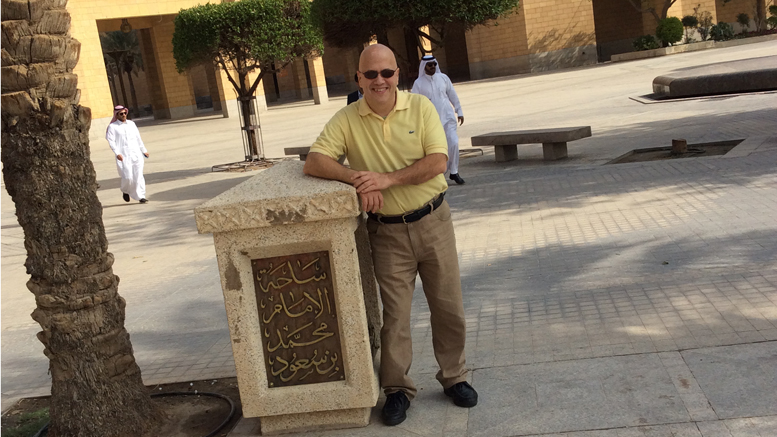 Michael Wicks has traveled the four corners of the world during his time as a research scientist for the Air Force, as a professor teaching in foreign countries, and as a plain, ole tourist. But one thing is a constant: his home always has been and always will be in Utica and in our parish. And he loves coming home.

You grew up in East Utica and still live there. What was the neighborhood like when you were a kid?

The neighborhood was mostly working families with stay-at-home mothers and fathers working in factories. Families all lived and worked in close proximity to aunts, uncles, cousins, grandparents, and many were Italian or of Italian descent. Across neighborhoods, we were all friends, and usually played in these neighborhoods. We walked to school or the playground and we were never board.

Despite being a world traveler, you still live in the house you grew up in. Why?

I still live in my family house for that one reason — it was my grandmother’s home. We lived upstairs and my grandparents lived downstairs with my uncle. It was a great place in the 1960s and ’70s with the constant cooking and baking day and night year around. The stories told by my grandfather were vivid. The summer gardens my grandfather planted were legendary. My grandmother spoiled all of us. It was great!

You’re a research scientist with many degrees, including master’s degrees and doctorates, you’re a professor and still work, even though you’re kind of retired? Did growing up in East Utica prepare you for your career?

My education at Mount Carmel, Notre Dame, and MVCC was excellent. Undergraduate school at RPI and graduate school at SU were fairly straightforward as we were so well prepared. Plus, the multicultural nature of East Utica 50 years ago prepared me well for interacting with people from the many countries I have visited and worked in over the years.

In layman’s terms, what exactly was your job and what did you do?

When I was at the Air Force Research Laboratory – initially working in radar at Rome but later in Dayton, Ohio, I developed sensors signal processing technology for intelligence, surveillance and reconnaissance systems. I was a systems engineer supporting a variety of national security needs cutting across the Air Force, Army, Navy and international partners through NATO and beyond. The last 10 years of my Air Force career, I was an executive, so I was able to solve problems at a very high level. It was great! Now I teach graduate students at the University of Dayton. UD is a Catholic college, and I stay there because it is Catholic. It is great! Last year, I graduated four doctoral students. One is now a research scientist at the FAA. Another, Hamdi, is a lead design engineer at Raytheon in California. A third is now assistant dean, teaching radar and signal processing abroad, and a fourth is teaching engineering students at UD.

How did you get interested in your field? Was there anyone in particular who guided you early on?

I was always interested in technology, most especially radio and television as a child, and computers when they first became available in the 1970s. As I became more and more interested in high power systems, radar really was the only option. I took classes in radar at RPI, and through a great professor, Fred Norvak, I met radar scientists at GE in Utica and RADC at Griffiss. My summer employment in 1978 included duties at Griffiss Air Force Base.

You’ve traveled all over the Earth and seen many cultures and places. What are some of your favorites?

My favorite city away from home is London. It is a cross section of the world. I was an adjunct professor at University College London, and that is where I first became interested in joining the faculty at a university upon retirement from federal service. Other favorite places include the Barossa Valley south of Adelaide, Australia, as it is so quiet and beautiful. The Barossa Valley is vineyard country. I have enjoyed my time at Bordeaux in southwestern France where I stayed at a cottage on the banks of the Garonne River more than once. Saclay, south of Paris, is beautiful and has an appeal like no other rural city. I really like Naples, Italy, as it is on the water. The food and wine are great, and I have friends there. Tuscany is also great and I still go every other year to a resort called Il Ciocco in Castelvecchio Pascoli. Algiers, Algeria, is a neat place to visit because of the music and the food from every culture you can name. I did some teaching there as a volunteer for UD. I have taught in many countries, but Saudi Arabia was among the most memorable, and the most recent.

What have your travels taught you about life?

Simple lessons in life that I teach all my students. Life is a mystery, so don’t try to figure it out. Change is constant, so enjoy those things that stay the same for a while – like Mount Carmel. Enjoy the moment, laugh and share the joy with others as it won’t always be like this. And most important of all, there is always something special going on. There are no ordinary moments. Enjoy each and every moment.

You always come home, however, and home also means our parish. What are some of the things you have been involved in?

I have been an altar server, a reader, a building committee member, a trustee, a Eucharistic minister, a volunteer at the annual feast in honor of Our Lady of Mount Carmel. I love Mount Carmel. It is as much a home to me as my house in East Utica.

What does the parish mean to you?

At Mount Carmel, I can sit in church and see those who have gone before us as if they are here — family, friends, priests, nuns and members of our beautiful parish. When I am at Mass, it is beautiful, the music is the best, and the community of believers is so strong. I love Mount Carmel. It is a home to me.

You always are an upbeat person with a smile. We all know life isn’t always kind. How have you dealt with any setbacks or adversities?

What’s the best piece of advice anyone ever gave you?

Don’t be afraid of dying. Be afraid of never living. Do something in the here and now. And, enjoy doing it!

What’s the best advice you’ve given someone?

What do you hope the next stage of your life holds for you?

I have started to teach abroad as a volunteer. I would like to do missionary work in poor countries in order to help people have just a little bit more in the here and now.