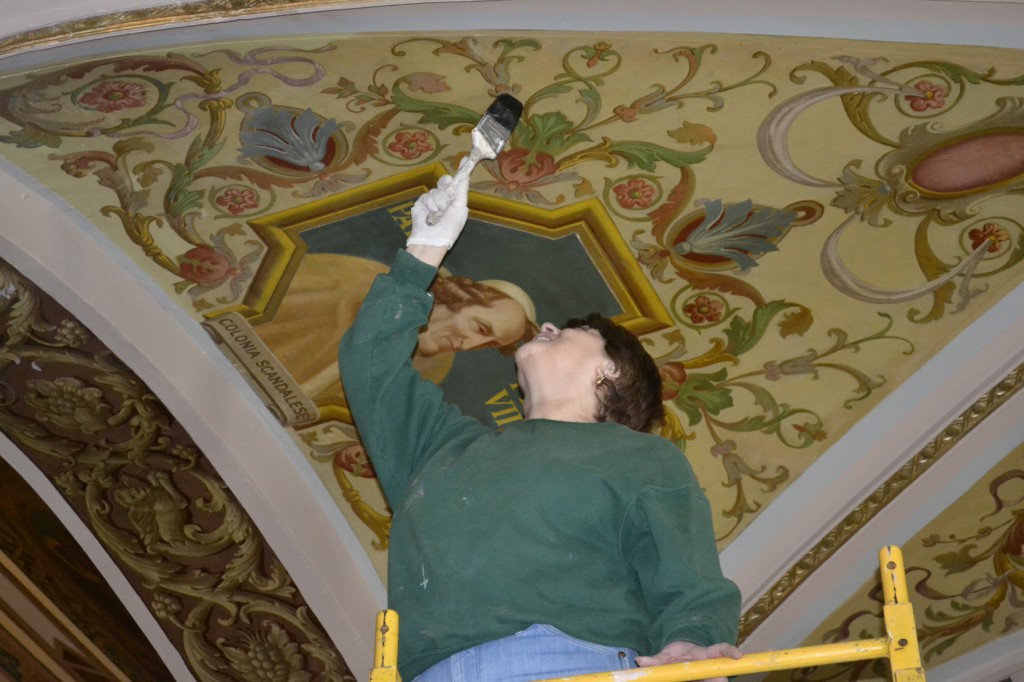 When a large bubble in one of the canvases attached to the ceiling of the west nave of the church appeared and began to detach itself, it was clear — we needed a restoration.

Though some people think of our ceiling as “frescoed,” it is not. Frescoes are painted directly on damp plaster and are absorbed into the surface, becoming part of the structure. They only come down when the whole ceiling or wall collapses.

The medallions and their accompanying “graffiti” in the cross-vaulting of the west and east naves of our church last had a restoration in 1971. Over time with expansion and contraction, humidity and water damage, the glue that held the artwork in place had lost its adhesion and plaster to which it was attached had deteriorated.

The person who had done that last restoration was Agostino Vetrano. With a degree from the University of Palermo and years of experience with his father and brothers in Italy, he had come to this country in 1978. He worked on many churches and even did portraits of several pastors.

His daughter Serafina, who has studied fine arts and frequented many professional workshops all over the country, joined him in his work and learned on-the-job techniques of restoration. Agostino worked until his death in 1978 and Serafina took over the family business. It obviously was a no-brainer as to whom Father Jim Cesta needed to call for this latest challenge.

I had the chance to sit down with Serafina and her husband, Bill Gape, while they were putting the finishing touches on one of the sections of the east nave. She graciously allowed me to observe and ask several questions about her work.

She told me that this isn’t the first time she has worked at Mount Carmel / Blessed Sacrament; in fact she showed me several areas that have come under her hand, including the trompe l’oeil and angel medallions under the choir loft. Trompe l’oeil is a technique that fools the eye into thinking a flat surface has three dimensional molding or decoration.

Out of curiosity, I asked Serafina in what other mediums she has worked. She says for her personal enjoyment she has been creating with pastels. Professionally, she has restored and painted statues, designed stencils (using stained glass motifs from particular churches), and done gold-leafing, glazing, wood-graining and created faux marble surfaces.

Asked what was involved in our restoration, she described the process.

“The canvases had to be removed without causing more damage,” she said. “If the ceiling behind it had plaster damage that had to be addressed with new plaster. Both ceiling and existing canvas has to be cleaned of old plaster and adhesive, along with the mold which was the result of water damage.

“Once the walls and canvas are adequately prepared, the canvas is then reattached back in place, and any artwork that is damaged must be repaired. I use oil paints (as did the original artist), so this means that there has to be a waiting period before portrait varnish can be applied. So scaffolding had to be moved back and forth several times.”

Asked what parts of the process she likes and which are not her favorite, she replied, “I love to paint, so that part is always a joy to do. Sanding surfaces never appealed to me, but the paint job is only as good as the surface it’s painted on.”

Clearly, she trusts husband Bill’s hand because he was doing some of that plaster reparation on the niche of Our Lady over the main altar on the day I was there.

A few years back she worked on the Immaculate Conception Cathedral in Syracuse and had six others working with her. That job lasted five months. Another job in Passaic, N.J., took a summer. She and Bill would work there all week long and come home on weekends.

In comparison to other churches, Sarafina commented on Mount Carmel / Blessed Sacrament saying, “The artwork is truly amazing! It’s like you would see if you went to Italy — no surprise there, since it was done by Italian artisans. But while other churches have beautiful artwork in the altar area, this church has artwork throughout its nave. Everywhere one looks is beautifully painted artwork. Attention to detail runs end to end with no shortcuts anywhere.”

“It’s been wonderful! Everyone has been warm and friendly,” she said. “All the personnel have been so helpful; their love and dedication shows. Mass participants stop by and talk with us, one even brought candy for Valentine’s Day. I would really like to thank everyone for making us feel like part of the community.”

And we would like to thank the Vetranos and Gapes for all the care they have given to their work here. The painting of the baptism of Christ where the grand piano is now, and where the baptismal font used to be, is an original by Agostino Vetrano.