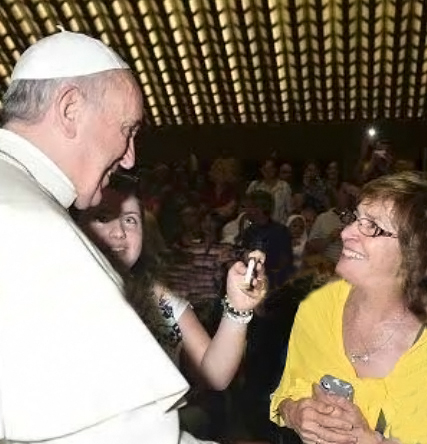 Life wasn’t being kind to Nancy Graniti earlier this year.

“I was going through a difficult time with a personal loss when suddenly there was an unexpected illness in the family,” Nancy said. “I felt like everything was closing in on me.”

So, she decided in July to return to the place of her birth – Italy.

Nancy came to the United States in 1956 on the infamous Andrea Doria, which sank on its next voyage.

“The decision to go to Italy was unexpected and unplanned,” she said. “I decided to visit my sister and family, which turned out to be the best medicine of all. No medicine or therapy can do what a loving and caring family can.”

What also turned out to be the right prescription was a chance meeting Pope Francis.

This wasn’t the first time Nancy, 66, has seen a pope. From a distance she saw Pope Paul VI and Pope John Paul II.

This was different. She got to talk with Francis and kiss his hand.

“I wanted to just spend time with my sister and family, but she insisted that we needed to do a pilgrimage, but none were available because of the timing,” Nancy said. “I suggested we go to Rome and who knows, we might be able to see Pope Francis.”

Nancy said her niece called the Vatican to make arrangements to have an audience with the pontiff but was told that no tickets were needed because he would be in St. Peter’s Square that day.

“Every Wednesday, the pope holds an audience in a large hall called Aula Paulo Sesto,” she explained. “It holds about 3,000 visitors from all over the world. That is where I was able to see Pope John Paul II.

When they arrived that morning, however, there was hardly anyone in St. Peter’s Square.
“For a minute, we thought plans changed and that he would not appear,” Nancy said. “Instead, when we went to the other side of the basilica there were hundreds already in line. Because of the hot weather they decided to move it inside.

“We waited in line for hours not knowing if we would be able to go inside,” she said. “We managed to make it in the aula. Our seats were about 30 aisles from the main stage where His Holiness would be.

What happened next, Nancy said, still is a blur.

“My niece went to ask one of the ushers a question and he just told her the Argentinians keep moving,” she said. “That is when she came and said, ‘Just follow me.’ and, of course, we did. We found ourselves about five rows back and in the section of the Argentina Bacio Mano group.”

Somehow, Nancy, her sister and niece ended up in a line of Argentinians – from Pope Francis’ native country.

“My sister and I along with my niece just looked at each other still not believing where we were and in a matter of hours we would be face to face with Pope Francis,” she said. “As we saw him make his way through crowds from St. Peter’s Square to inside the aula, we’re still not really believing all this was happening.

“Emotion flooded through my mind, along with tears and shock, and when he finally approached me all I remember saying is, ‘May I kiss your hand,” which I did, then I remember touching his shoulder as he approached my sister and that is when I plainly said, ‘By the way, I bring greetings from Utica, New York.’ He turned and gave a big smile and looked confused as if to say what are you doing in the Argentinian group.”
Nancy doesn’t remember much else about the chance meeting.

“I was in such a state of awe and disbelief that it all seemed like a movie or a dream,” she said. “I do know all that is said about him is true. He is a very gentle, humble and very patient. Never during all the people he blessed and spoke with did he ever show distress. People brought gifts, which he humbly accepted, and a little boy pulled the cap off his head and he took and gave it to him.”

Nancy, who has worked at Walmart for 20 years, visited a number of other places in the “Old Country” while she was there, but nothing could compare to meeting the pope.

“I have gone many times to Italy, have seen many places, have been to Rome numerous times, but having seen, touched and spoken with Pope Francis was and will always remain a most memorable time in my life.”

We’ve all heard the phrase that God works in mysterious ways. Nancy isn’t sure whether this was God’s way of telling her that the troubles in her life aren’t insurmountable, but she did take something away from meeting the pope.

“Has it changed my life? No,” she said. “But I do know I look at life a little differently, accept whatever life brings — some good, some not so good. I also believe if you have faith you will make it through.”