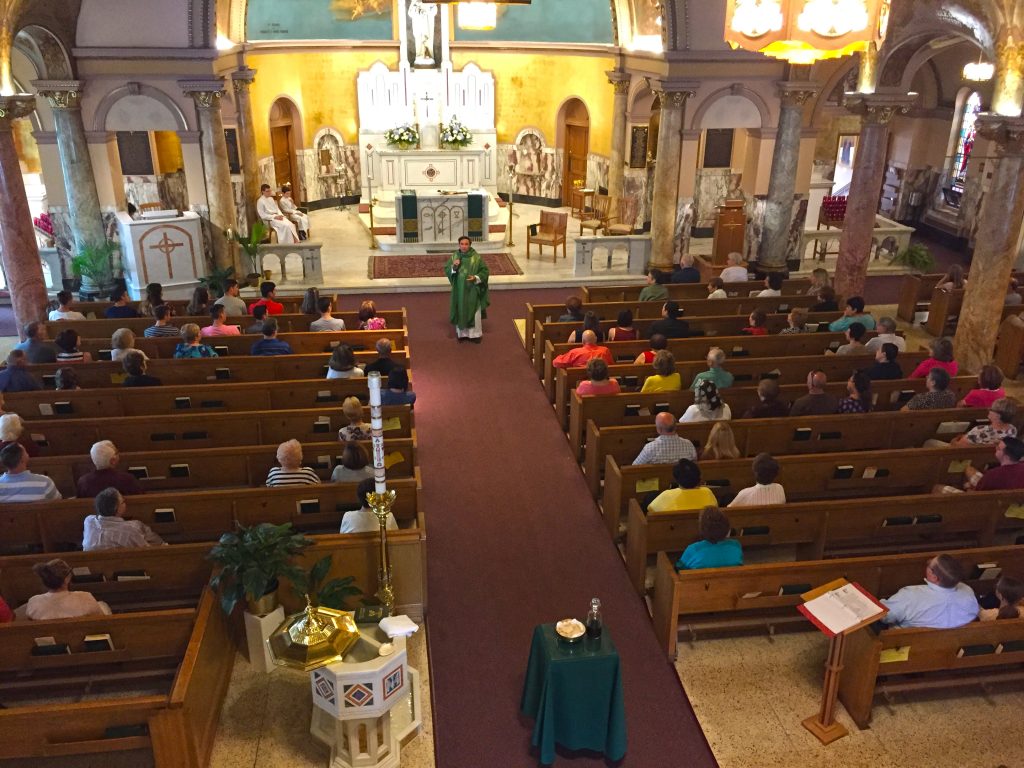 The Roman Catholic Church has faced obstacles over the last several decades with fewer people identifying as Catholic and parishes merging or closing.

According to the Wall Street Journal, roughly 81.6 million Americans — or about 25 percent of the overall population — identify as Roman Catholic. Catholics comprise the largest religious group in 35 states. Yet, according to the Journal, the church is changing thanks to demographic trends and shifting attitudes toward religion.

Some 25 million adults, or a third of all active members, no longer identify with the church, according to the 2015 Journal report. Most of those who leave abandon affiliated religion altogether.

Locally, many parishes have closed and/or merged with others.

Mount Carmel always has been a thriving and lively parish, and welcoming many from Blessed Sacrament enhanced the community.

The Rev. Jim Cesta said changing demographics has caused a shift where people have moved out of older cities and into outlying areas, building new churches while older parishes are “weakening” and newer parishes “are doing very well.”

“The parishes that are doing well with attracting new people are parishes that not only offer devotions, liturgy and worship that is well done, but also have many social programs and outreach to the communities in which there with,” he said. “ Many people, especially young people today, are looking for not only to fulfill their duty to go to Mass, but are looking for a place that reaches out, makes the community better or offers social opportunities just for people to enjoy one another’s fellowship. So, if a parish hits all the buttons … that parish will gain new people. If a parish offers basically only the sacraments, they are weakening.”

She and her husband decided to give Mount Carmel a try to support former pastor the Rev. John Rose in helping him complete the merger.

She doesn’t regret it.

“When you join a parish and attend weekly Mass you realize it is not a building but a community of people,” she said. “As you involve yourself in activities, the stranger becomes your friend and friendship lasts a lifetime.

“Our parish is alive,” she added. “You can feel the energy as people start arriving before Mass. We care about one another. Look around at Mass — more and more people are here every week,”

Scott and Loraine Bolen of Barneveld traveled a long way to get to Mount Carmel / Blessed Sacrament.

They attended St. Peter’s Catholic Church in Big Pine Key, Florida, for years, which they termed “a wonderful parish.”

While many people retire to Florida, Scott and Loraine decided to return home.

“We both retired from federal government service and returned back home to our family and friends in upstate Central New York,” Scott said. “We had been away for 16 years having spent a long tour of duty in Washington, D.C., before finally arriving at our last duty station at the Naval Air Station in Key West, Florida. After that, it was time to come home. We moved close by to our daughter and son so that we could enjoy them and our grandchildren.”

And that led them to Mount Carmel / Blessed Sacrament.

“We attended a few other parishes in the area but finally decided on Mount Carmel,” Scott said. “Our friend Dr. Mike Wicks suggested Mount Carmel during one of our visits with him when we returned home. He gave us a tour one afternoon and urged us to attend Mass — that was three years ago! We immediately fell in love with our new parish family. We were greeted with the warmest, most friendly welcome. Everyone made us feel at home, embracing us right away with broad smiles and open hearts.”

Kathy Smith and Evie Kavanaugh are sisters who live in Utica who became disenchanted with their previous parish.

“It was very nice there, but many changes took place and my sister and I became disappointed and wanted a change,” Kathy said.

She said her cousin and husband attended our parish.

“She asked us to attend a Mass,” Kathy said. “We did, then went again. The rest is history.”

Evie said she has found the parish warm and welcoming.

“Father Cesta put me at peace,” she said. “I just felt like I had been going to the church for a long time. I loved the music and choir.”

Kathy’s advice to others looking for a new spiritual home: “Come join Mount Carmel. It’s like coming home to His house.”

Scott and Loriane said they have found “so many caring, friendly and supportive people.”

Like Kathy and Evie, they have a bit of advice for others:

“We tell everyone we know, ‘Come to St. Mary of Mount Carmel. … This will become your home.’”