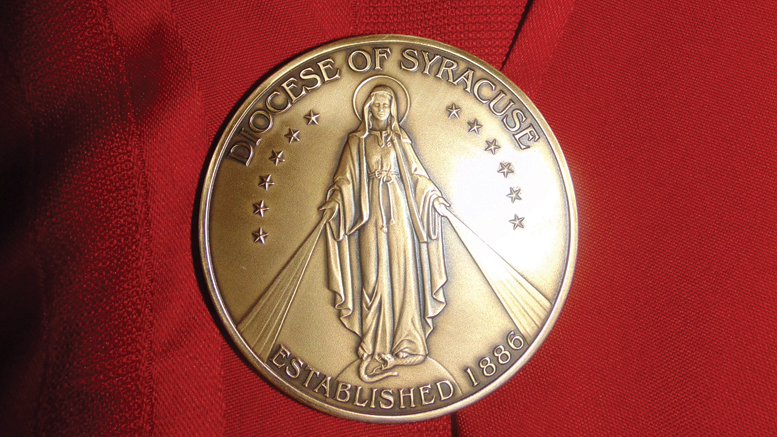 The sun’s brilliance illuminated the Cathedral of the Immaculate Conception in Syracuse on a crisp Sunday afternoon in December.

Inside the magnificent edifice honoring the Blessed Mother there was plenty of warmth as an overflow crowd of family and friends were there to honor 105 people who were recognized for their dedication and love of their parishes.

Those select people from parishes throughout the Roman Catholic Diocese of Syracuse were there to receive the Immaculata Medallion, given to those who were chosen by their pastors as emblematic of their service to their parish families.

Victoria Perritano – Vicki – was one of the chosen 105. She was the seventh person in the last six years to be selected from Mount Carmel / Blessed Sacrament for this honor.

For Vicki – who is a Eucharistic minister and the person who gets things ready and serves the 8:30 a.m. daily Mass – the honor brought her to tears.

“I was very humbled, because whatever I do it is done with all my heart,” said Vicki, a parishioner for 87 years. “I truly enjoy what I do.

“The Immaculata Medallion means so much,” she said. “I feel the Blessed Mother is always with me, protecting me and watching over me no matter what I do.”

The Immaculata Medallion is an award recognizing and honoring those who generously and unselfishly give of themselves to their parishes and whose love for the church has been shown through their devotion to the Holy Father and to the diocese.

Rosemarie Chiffy was the parish’s first recipient of the award in 2011. David Struz was honored in 2012, Dennis and Helene Toczala in 2013, Gordon Schindler in 2014 and Lucille LaVine in 2015.

Compared to many, Dennis and Helene Toczala are relative newcomers to the parish. They have been parishioners since 2007 when they moved to the area from Florida to be near their grandchildren.

When they were named the 2013 recipients, they were “surprised.”

“We never considered ourselves as suitable candidates for this award,” they said. “Although we feel honored and appreciate the recognition, it was not part of our intention for volunteering. It made us feel a little uncomfortable at first. But, eventually, we were thankful to Father Cesta for nominating us and we were pleased to have many parishioners congratulate us for this award. We hope to be deserving.”

The Toczalas have volunteered in the marriage preparation program and eventually moved on to volunteer with the Retrouvaille marriage program at the Good News Center. Dennis served on the parish council for one term and they both serve at funeral Masses. Helene is a Eucharistic minister and they both lector at weekday Masses. They also help out at the flea market during the parish festival.

“On our day off, we volunteer at Abraham House.”

While the Toczalas have been part of the parish family for about 10 years, Lucy LaVine has been around just a bit longer.

“I have been a parishioner of St. Mary of Mount Carmel since I was baptized, which brings me to my 83rd year and counting,” she said.

When Father Jim told her in 2015 that she was going to receive the award, “I was stunned and humbled.”

“What I do as a volunteer, I do with all my heart, and didn’t expect to be rewarded for it,” she said. “It is the ultimate in rewards, for the Blessed Mother has always been very special to me.”

Lucy volunteers as a Eucharistic minister, a lector, a meal server at Hope House, a greeter at the 8 a.m. Mass on Sunday mornings, an altar server at funerals and a parish office helper.

Rosemarie Chiffy, a parishioner for 90 years, was the first recipient of the award.

“Father announced at a St. Anne’s dinner that I would receive the award and I was quite taken aback,” Rosemarie said. “I did not feel worthy of the award. It has always been my thought that volunteering and helping out at your parish was what a good Christian does. It never occurred to me that I might receive accolades for the work that I have done over the years.

“Although I felt this way initially, I was also quite honored to receive this medal, not only for myself, but for my mother and grandmother who gave so much of themselves and taught me what it means to give for the benefit of others.”

Rosemarie has volunteered over the years in many areas. Currently, she coordinates pastoral visits, trains and schedules lectors and Eucharistic ministers, coordinates funeral lunches, takes care of altar linens, is on the Liturgy Committee and works in the sacristy. She also is president of the St. Anne’s Society and co-chairwoman of the Mount Carmel Society.

David Struz has been a parishioner for about 35 years. He’s a lector, sings in the choir, volunteers at the festival and works with the parish’s Burmese community.

Receiving the award in 2012 was very humbling.

“It, hopefully, will encourage other people to volunteer,” David said. “It is an honor I hope to live up to.”

One thing all seven Immaculata recipients agree on is the importance of serving the parish.

Lucy said, “With our parish being a busy one, it is important for those who are able to come forward and help in any way they can. It is so rewarding to touch and, hopefully, to better the lives of others.”

The Toczalas agreed volunteers “are the lifeblood of parish life.”

“They try to set an example of serving the needs of the faith community,” they said. “Hopefully, they inject enthusiasm, generosity, love and acceptance. We learn best when we work with others in a spirit of cooperation.”