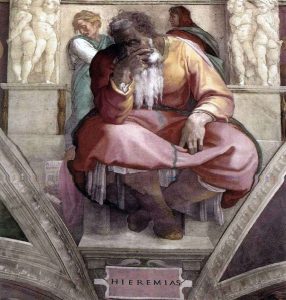 Jeremiah is a male name meaning “Yahweh will raise.”“

Jeremiah is called the “weeping prophet” because of the many tribulations he encountered. He also is the author of the Book of Lamentations.

More detail is known about him than any other prophet — the book of Jeremiah includes statements of God’s Word as well as many of Jeremiah’s physical actions.

Jeremiah was called to prophesy about Jerusalem’s destruction by invaders from the north because Israel had been unfaithful to the laws of the covenant and had forsaken God by worshiping Baal.

Jeremiah condemned people burning their children as offerings to Moloch.

Jeremiah was guided by God to proclaim that Judah would be faced with famine, plundered and taken captive by foreigners who would exile them to a foreign land.

Jeremiah resisted the call to become a prophet complaining that he was only a child and did not know how to speak. The Lord, however, insisted that Jeremiah go and speak, touching Jeremiah’s mouth to place the God’s word there. God told Jeremiah to “Get yourself ready!”

The character traits and practices Jeremiah was to acquire are specified in Jeremiah 1. They include not being afraid, standing up to speak, speaking as told, and going where sent.

In his early ministry, Jeremiah was a preaching prophet. He condemned idolatry, the greed of priests, and false prophets. Many years later, God instructed Jeremiah to write down these early oracles and his other messages.

Jeremiah’s ministry prompted plots against him. His priestly kin and the men of Anathoth conspired to kill him. The Lord, however, revealed the conspiracy to Jeremiah and protected his life.

When Jeremiah complains to the Lord about this persecution, he is told that the attacks on him will become worse.

Pashur, a priest and temple official, had Jeremiah beaten and put in the stocks for a day. After this, Jeremiah expressed lament over the difficulty that speaking God’s word has caused him and he regretted becoming a target of mockery. He recounted how if he tried to shut the Word of the Lord inside and not mention God’s name, that Word became like fire in his heart that he was unable to hold it in.

Jeremiah was subject to additional persecutions. After he prophesied that Jerusalem would be handed over to the Babylonian army, the king’s officials, including Pashur the priest, tried to convince King Zedekiah that Jeremiah should be put to death for discouraging soldiers as well as the people.

Consequently, the king’s officials took Jeremiah and put him down into a cistern, where he sank into the mud. The intent was to kill Jeremiah by allowing him to starve to death, allowing the officials to be innocent of his blood. A Cushite pulled him out of the cistern, but Jeremiah remained imprisoned until Jerusalem fell to the Babylonian army in 587 BC.

The Babylonians released Jeremiah, showed him great kindness, and allowed him to choose the place of his residence. Jeremiah went to Mizpah in Benjamin with Gedaliah, who had been made governor of Judea.

Johanan succeeded Gedaliah, who was assassinated by an Israelite prince “for working with the Babylonians.” Refusing to listen to Jeremiah’s counsel, Johanan fled to Egypt, taking with him Jeremiah and Baruch, Jeremiah’s faithful scribe and servant, and the king’s daughters.

Jeremiah spent the remainder of his life in Egypt, still seeking in vain to turn the people to God who had so long revolted against God.

There is no authentic record of Jeremiah’s death. 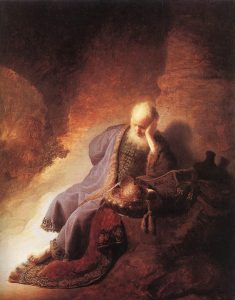 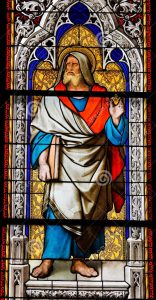 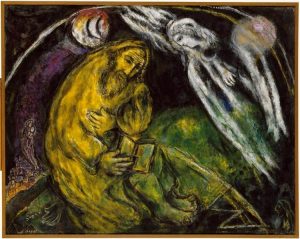 The prophet Jeremiah by Marc Chagall

The Call of Jeremiah

How Do You Deal With The Haters?

Understanding the Worth of Sparrows

You Are Worth More than Many Sparrows 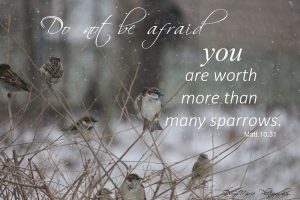 Liturgical music for this week

“What You Hear in the Dark”

“Blest Be the Lord”

(Dufford, sung by many Catholic artists in response to the pandemic)

“Faith of Our Fathers”

“More Than Many Sparrows”

“His Eye Is On the Sparrow”

(Tallis, by The Queen’s Six)

(Z. Randall Stroope and the Bughers of Calais sculpture by Rodin) 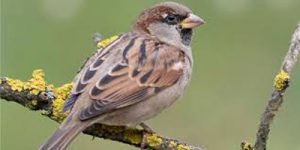