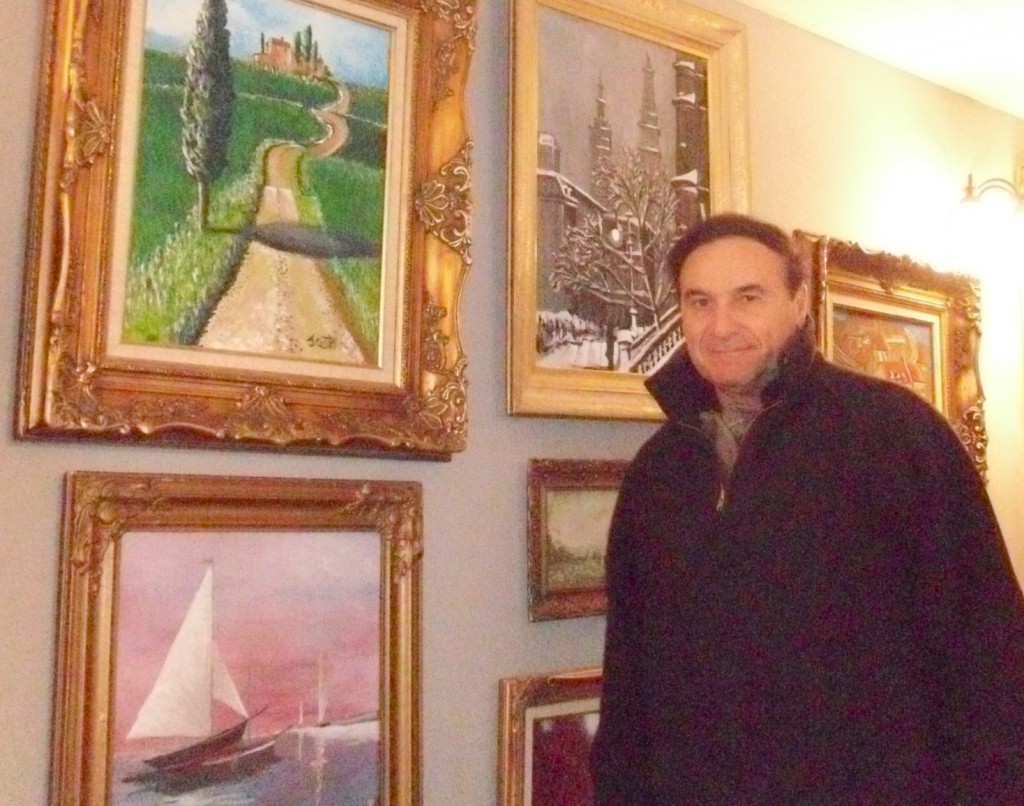 There’s something very special inside the rectory at St. Mary of Mount Carmel / Blessed Sacrament Parish.

Yes, there are the usual things one might expect to find. As you walk through the front door and entranceway into the vestibule, there’s the business end of the parish. The office of the secretary and business administrator is to the left; down the hallway at the right are offices, one of which the pastor occupies.

As you continue forward through another doorway, there’s the personal side of the quarters: a living room, dining room and kitchen. Upstairs, a number of bedrooms.

If you explore a little closer, however, there’s a hidden treasure. As you exit the business side of the rectory and enter the living quarters and turn to the left, there’s a wall on which many paintings hang, all in ornate frames.

Large and small they jump out: a table laden with fruit, a sailboat on tranquil water, a winding road leading to someplace in the distance, and a chilly winter-in-the-city scene.

Explore a little further into the dining and living rooms, more artistry beckons. The walls are covered with more paintings, including another peaceful water scene displayed over the fireplace.

Father Jim, in addition to being a priest and a comedian, is a painter. He has been “from my earliest memory.”

He’s so good, he is the liturgical designer for the Roman Catholic Diocese of Syracuse. He’s taken courses in Chicago and Rome, Italy.
The formal courses just add to a talent Father Jim says is “just natural. Like a gift.”

He calls painting “diversion therapy” that involves a lot of effort that doesn’t feel like work.

“All painting involves work,” Father Jim said. “But when you enjoy it, it’s never work.”

And like a true artist, he sometimes never is satisfied with his creations.

“I love the light effect of sunshine,” he said of Monet, noting his paintings were quick and impulsive.

While most parishioners have not had the privilege of seeing Father Jim’s artwork, they have seen his creativity in church.

All those banners that hang on the pillars and are displayed in the sanctuary during special celebrations are Father Jim’s creations.

We all know Father’s Jim’s main calling is to God and serving His people, but if he didn’t choose the priesthood, his career choice would have been in the creative end of the spectrum.

“Perhaps an architect or designer or symphony orchestra player,” he said. (He’s an accomplished pianist, too.)

So, as Father Jim continues his work in the parish, he’ll continue to make people laugh and always keep drawing from his creative genes.

But before he’s called to the great gallery in the sky, he might like to create one piece that suits his personality and love of Mount Carmel / Blessed Sacrament.