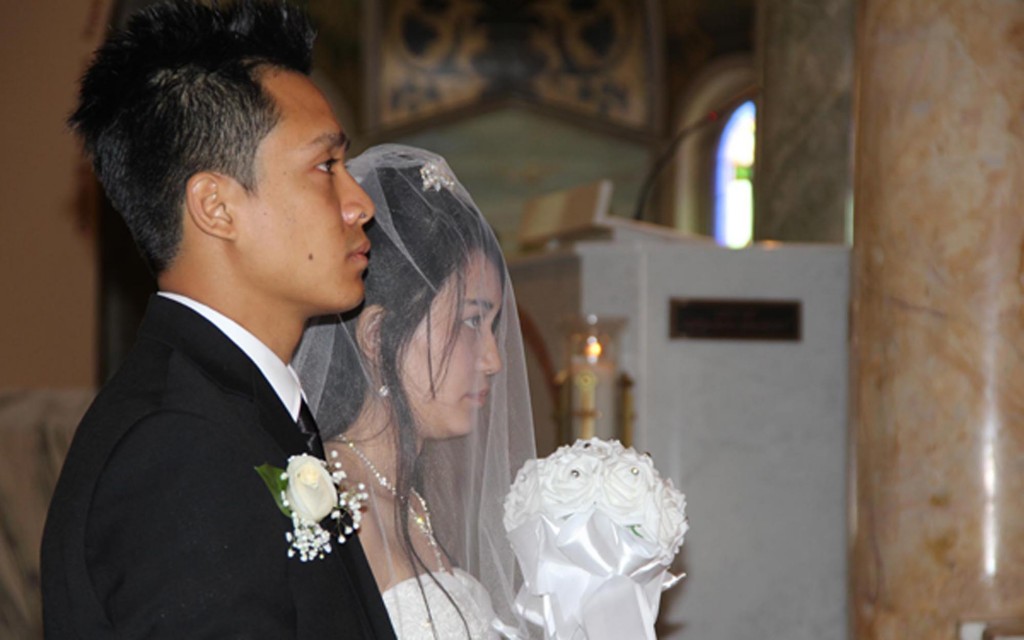 Jameo Htoosay is 26 years old. He came to Utica alone about two years ago after living in Burma until he was 15 and then spending eight years in a Thai refugee camp. Mary Koe is 20 years old and came to America with her family almost six years ago after being born in a Thai refugee camp. Jameo works at St. Elizabeth Medical Center as a medical interpreter. Mary graduated from Thomas R. Proctor in 2014 and now studies radiology at Mohawk Valley Community College. As fate (or the hand of God) would have it, they met and fell in love. On Aug. 8, they were married at Mount Carmel / Blessed Sacrament and enjoyed a reception in the church social hall. Jameo tells their story.

What was your wedding day like for the both of you?

It was a blessed privilege for us that we got a chance for our wedding at Mount Carmel Church and it was the most beautiful day of our lives. I personally never thought I would meet my wife, who is a Catholic, but as the will of the God, I met her and I am blessed to have our wedding in the holy Catholic Church. The day was a perfect day for us, and on behalf of my wife and me, I sincerely thank the church, Father James and the community of the holy Catholic Church as I have received a warm welcome.

How did you meet your bride?

I met my beautiful wife on her father’s birthday, and my father-in-law still keeps saying that I am a gift of his birthday for his daughter (as I am a hard-working and nice young man). It wasn’t my first time that I met her on that day because I had seen her at the place where I worked where she was also working for a short period of time. It’s been roughly a year that we’ve been a couple.

When you first met, was it love at first sight?

I personally didn’t think I would have married her until I met her on her father’s birthday. And I didn’t plan to go to the birthday party because I usually worked late, but I did, somehow, and met the beautiful and happy family of her parents, herself, two little brothers and one sister. As I am a loner here in America, I was thirsty for family warmth and dreamed of getting love from a family. Since both my parents have passed away and since I am thousands of miles far away from my brothers and sister, my life here in America is as a tree in the desert. That’s why I was getting close to my wife’s family as the days went by until I decided to request to marry her from her parents.

What was it like in your native land and why did you come to the United States?

My life back in Burma was chaos, and also in Thailand, and I was not being recognized as a human being. My life in the refugee camp is nothing more than a bird in a cage, but I tried not to be a bird; rather, I tried to be an eagle that would break away from the cage. As I wanted to be who I am, I invested my entire time in the refugee camp in school and study. I was in a refugee camp in Thailand when I was 15 years old and I finished school in camps. I sought an opportunity for further education and I was chosen for scholarship in a Thai city for a year with three-month internship overseas in Indonesia. I have learned to speak English since then and it was an advantage for me when I came to America.

It’s a brave decision to leave one’s country and go to one that is so different. What were your feelings at the time?

I like to try new things — it was my hobby since I was a child. I enjoy doing things I have never done and also visiting new places. As a young man back in Thailand, I enjoy American music and movies (I have learned English from music and movies, too.) As I realized I had no future in the camps, of course, I just sought to get to the place where I was supposed to be … America! I waited for seven and a half years to get to America, and since I knew I was going to America, I prepared myself in order to adapt: culture, languages, basic communications such as Google, social media and so on.

What are your thoughts about Utica?

Utica is like a picture full of colors, colors that present diversity all over the world. I would imagine my life would be totally different if I am relocated in places such as Alaska or states that don’t have any migrant population. But I am glad I was relocated to settle my new life in the place where people like me have been relocated. I got a lot of help from the community when I first came here to Utica and am thankful of the people who have helped me settle my life.

I would return home one day for a visit, but from now on my life is here in Utica and here in America, the place where human being is recognized with dignity and as who we as a human being are.