There exist some people who have taken upon themselves a kind of way of living they call the “Benedict Option.”

Inspired and fascinated by the example of the sixth-century monk Benedict of Nursia, Italy, these people seek to live protected from the hostile and rather faithless culture around them.

St. Benedict, founder of the great Benedictine Order of men and women who established the famous abbey of Monte Casino between Rome and Naples, was convinced it was impossible to live and keep alive the flame of Catholic and Christian faith in the culture of the Roman Empire.

So, living separate from and relying on each other and their own personal faith — in addition to the sacramental life of the church — those of the “Benedict Option” struggle to live in what is a post-Christian America. 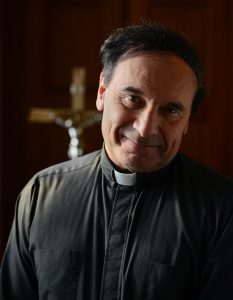 Some would say that most things about our American culture seem to conspire to put down or eliminate things such as faith in God, the sanctity of family life and the sacredness of all life, the value of communities of faith, churches and worship itself.

Some would say the only way forward is to turn inward and be removed from the modern culture.

Well, that approach isn’t really possible, even recognizing that we do struggle to practice our Catholic ways surrounded by so many forces that seek to weaken us. The best way is the tried-and-true way: to value faith, family and weekend community worship so much that it takes a more significant place than other things in the complex and busy lives we lead.

Baptism, First Holy Communion, blessed marriages always invite the fuller and faithful practice of what it means to be a Catholic person or family — it can happen without the radical approach of the “Benedict Option.”

For many years, parents and their children having the motto, “Where there’s a will there’s a way,” have practiced very satisfying and fruitful lives within the household of our faith. The pull of sports, home entertainment, working, a high-tech secular culture is extremely powerful.

In addition, the temptation to give in to a kind of attitude of not making commitments to formal religion is an unfortunate attitude these days. It always comes down to making priorities and sorting out what is essential for a good, healthy and holy life. It doesn’t involve removing yourself from the world around you. It does demand being committed to the treasure of Catholic faith and life.