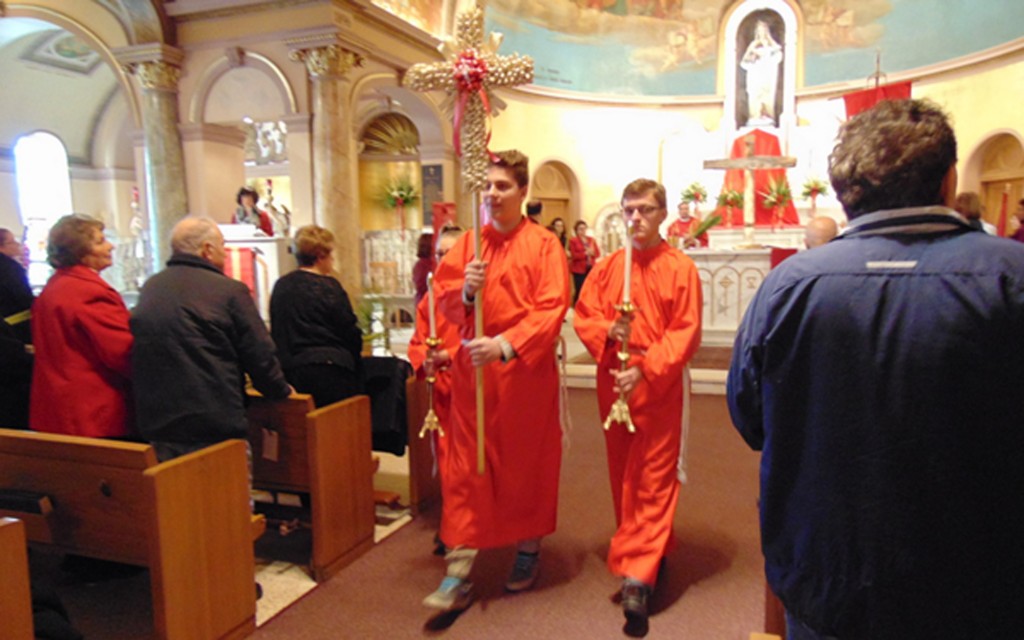 Altar serving sure has changed over the last few decades.

Back in the dark ages of the 1960s (and earlier), altar boys (no girls allowed) had to face the altar (backs to the congregation), memorize and recite prayers in Latin, wear white tennis shoes so you wouldn’t make any noise walking, genuflect when the good Sister snapped her “clicker,” and had to be at the right place at the right time or get the death stare from the priest (no sense of humor back then).

That’s not to say that being a server was any less reverend or gratifying, it was just a different time.

Today, nearly half of the 30-plus altar servers at Mount Carmel / Blessed Sacrament are young ladies, and what hasn’t changed is the dedication to serving the priest, Jesus Christ and God in the sanctuary of our church.

Our dedicated servers show up every weekend, assisting at Mass and making the experience very meaningful for the congregation.

John Reale, in addition to training altar servers for Mass and special celebrations since 1990, knows a thing or two about serving. He was one for about a decade.

“Altar servers play an important role at Mass,” he said. “Yes, they are assisting the priest with the various parts of the Mass, but I also feel that their presence and dedication in how they serve Mass provides an inspiration to the congregation. … I think we all come together as a parish family during any of our liturgies to make them beautiful and inspiring, and altar serving is definitely a major part of that.”

Zachary Slade, 11, has been serving for a few years, and he loves it.

“I saw the servers when I first joined the parish a long time ago and was like, ‘I want to become one of them,’” he said. “When I was in third grade … my friends David and Nicky Elacqua showed me what to do and they sort of did a trial Mass. I liked how it was and even more I wanted to be one.”

Zachary loves helping out during Mass, and calls it “a rewarding experience.” And serving in our parish is very special to him.

“It’s a very alive church, unlike some that have no singers, and the altar servers do literally nothing,” he said.

Zachary said Holy Week is very special – “Those Masses are just beautiful” – and “Father Cesta is also the best priest anyone could ever have.”

Zachary’s said his favorite part of the Mass is the consecration.

“It is always a big, powerful moment ringing the bells to consecrate the Body and Blood of Christ.”

“Communion is the most special part of Mass for me because it’s special that everyone gets to receive the host and drink the wine,” he said. “It’s like the part that is being prepared for during the whole Mass.”

“The most special part of the Mass for me is Communion,” he said. “I feel very close to God and it feels great after I take Communion because I feel like anything that has bothered me over the week goes away.”

David said he wanted to become a server after watching other servers.

“My cousin Bethie would carry the cross so high in a procession and I thought that was so awesome,” he said. “After watching her and the other servers, it made me want to become an altar server.”

Rachel and Mark VanDusen have been serving for a few years. They enjoy helping out and said it’s a great experience.
What are their favorite parts of the Mass?

“The most special part of the Mass is the homily because Father Cesta always ties it in to real-world things and it is very interesting to hear,” said Rachel, 13.

“The most special part of the Mass is the Gospel because it’s different every week,” said Mark, 11.

“They have a great energy for wanting to serve Mass,” he said. “I enjoy working with all of them whether for weekend or special liturgies. When we rehearse for Holy Week or Christmas Masses, you can see the enthusiasm in their faces. They are willing to take part in any way they can. They especially put forth a great effort during Holy Week with all the different rehearsals and the time serving the actual liturgies; it is a big commitment during that week.”
His one piece of advice to servers?

“Never feel like you are too old to serve Mass,” he said. “I understand at some point we all need to move on to other ministries within the church, but it is always an honor and a privilege to serve Mass no matter how old we become. Keep an open heart as you never know where God will need you next after being an altar server.”

SERVING WITH FATHER JIM
When asked about what they like about serving with Father Jim, there was a consensus:

• Joseph Rizzo: “I like serving for Father Cesta because he makes jokes and he is a good priest.”

• Alana Batson: Father Cesta is very funny. He always makes me smile and laugh, and he makes me feel more comfortable when I’m serving.”

• Kennedy Crouse: “Giving him help so he does not have to worry about getting all the cups and stuff.”

• Megan Gromo: “I like serving for Father Cesta because he is funny.”

• Matthew Gromo: “I like serving for Father Cesta because he makes you feel comfortable.”

• Joseph Rizzo: “I like serving for Father Cesta because he makes jokes and he is a good priest.”

WANT TO BECOME A SERVER?
If you’re in third grade or higher, attend weekend Mass and participate in Faith Formation, you can become a server. Send your name, phone number, email address and the Mass you would like to serve to hondo17@roadrunner.com.