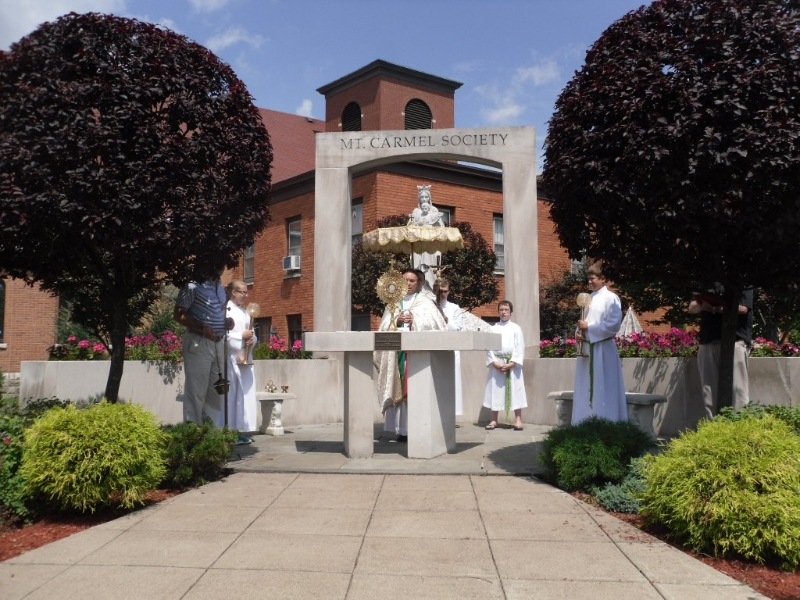 For generations, it’s been about her. Always has been. Always will be. Decades ago, the primary reason for the founders of the then-Mount Carmel Church festival was to honor the patroness of the parish – Our Lady of Mount Carmel. It hasn’t changed.

Angelo Amodio is chairman of this summer’s festival that runs Friday through Sunday, July 18-20. It’s his second straight at the helm, and the 11th time he’s been in charge.

And he does it for one reason.

“My primary reason for the work I do is my complete and total devotion to the Blessed Mother,” he said, noting that many others have the same cause.

“Our parish has been fortunate to have practically the same people come forward to chair a particular booth year after year,” Angelo said. “Why do they do it? They do it because of their devotion to this beautiful church, their devotion to Our Lady of Mount Carmel and because they also have a lot of fun.”

The festival takes place each year coinciding with the Feast of Our Lady of Mount Carmel on July 16.

The feast celebrates the devotion that the Blessed Virgin Mary has to those who are devoted to her, and who signal that devotion by wearing the Brown Scapular. According to tradition, those who wear the scapular faithfully and remain devoted to the Blessed Virgin until death will be granted the grace of final perseverance and be delivered from Purgatory early.

While honoring Mary is the primary focus, the festival also is the parish’s primary fundraiser.

Marge Hanrahan has been in charge of ticket sales for a number of years. She said the fundraiser is “extremely important.”
“Money raised from Buona Fortuna is used for upkeep of the church or school (building),” she said.

Marge said the idea of Buona Fortuna came about around he parish’s 100th anniversary in 1996. Prior to that, raffle tickets were sold for $1 apiece with less money raised and fewer prizes paid out.

For her, the task of making sure ticket sales are brisk is a challenge and a blessing.

“It can become a worry for me,” Marge said. “I want to do better than the year before. And even though we manage to, I still hold my breath and pray that we will. Our parishioners (both sellers and buyers) always come through. I don’t have to tell you that; you can see it every time we ask for a donation — whether it’s Christmas toys for the children, or pencils and crayons for the beginning of the school year. We are generous. God bless the Mount Carmel family.”

While the festival takes months of preparation – planning starts in January – those responsible for making it happen have a lot of work to do but also get a lot of enjoyment out of it. They see the fruits of their labors in changes that have been made through the years to all those who volunteer their time and talent.

“I have been working at our festivals from the first year I was married and I have observed the transition from our volunteers having to cook under hot tents with a number of stoves and huge pans, to a much easier setup for the food booth, which is a big money-maker for us,” Angelo said.

“Years ago, most households had only one person working full time, which left us with an abundance of mostly women who had much more time to devote to our festival. Times have changed, and with the two parents now working, it is harder to depend on volunteers like we did before.”

And it’s those volunteers that help keep the tradition and the Feast of Our Lady of Mount Carmel alive.

“Volunteering to work at the festival is a way of giving to your church and a way of celebrating the feast day of Our Lady of Mount Carmel, who is by far one of our most powerful saints,” Angelo said. “No one chairperson can put on such a large event without the blood, sweat and tears of a number of many devoted people who appear on the scene year after year ready willing and able to help. I have been very fortunate to have good people on my team and I thank God for that.”