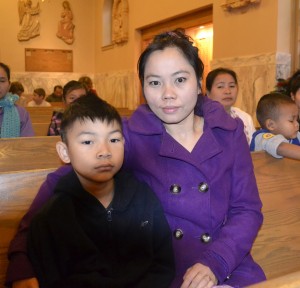 St. Mary of Mount Carmel Church was founded nearly 120 years ago as a neighborhood parish that ministered to the spiritual needs of immigrants. It served the newly arrived and burgeoning Italian-American population that supplied laborers to the busy textile mills, foundries, and brick and railroad yards. Today, as Italian-Americans have assimilated, many moving out of the neighborhood, the population has shifted to include Hispanics, Asians and members of various Muslim communities.

Many from Southeast Asia have found a new home at Mount Carmel / Blessed Sacrament, and it’s a trend that’s been happening all over Utica for several decades.

The largest groups ever resettled to Utica in the late 20th and early 21st century include Bosnian, Burmese, individuals from the former Soviet Union, and Vietnam.

Dan Hkawng La, a Kachin, emigrated from Myanmar in 2007. He now lives in Utica and works at Chobani Yogurt in New Berlin.

He said he likes worshiping at Mount Carmel / Blessed Sacrament because it is “familiar” to him. When asked what he finds different about church here, he said that there are more “old” people at Mass. In Myanmar there were more young people.

“Everybody goes to Mass there.” he said.

Mary Yu, an ethnic Karin who arrived here in 2004, comes to Mass on Sundays in her native dress. You might have seen some of the boys wear their characteristic tunics over their western garb.

John Kun Su and Rosie Ann, ethnic Kayahs, are among our most recent arrivals, having come to Utica in November. They say they like it here but still are getting used to the “cold” weather.

Like the Italian influx in the early 20th century, those from foreign lands continue to find a home away from home in Utica. In addition to the nearly 4,500 Bosnians fleeing their war-torn country in the mid-1990s, more than 2,400 have emigrated here from the former Soviet Union since 1979; more than 3,000 from Myanmar, formerly Burma, since 1979, most arriving here since 1997; and nearly 2,100 Vietnamese since 1979.

Some of those immigrants are in the pews every weekend at Mount Carmel / Blessed Sacrament.To understand these refugees and immigrants, we must delve into their history and the reasons why they came to the United States.

The entrance of European interests in Southeast Asia began in the early 16th century and, though they may have brought Christianity, it wasn’t all pretty.

Violent skirmishes between Portuguese, Dutch and English resulted as each tried to drive out the other for the valuable spice trade. It was the Dutch who prevailed until the entrance of the French in 1799. It was only in the 20th century that they left. The only country of all the Southeast Asia to maintain some sort of autonomy through it all was Thailand.

With Christianity’s arrival came revived ideas about nationalism that fueled conflicts between indigenous people and their colonial rulers. In World War II, the Japanese sought to take the territories. After the war, the United States granted independence to the Philippines and the British withdrew from Burma.

Indonesia fought the Dutch, and the French didn’t withdraw from Indochina until 1954. The power vacuum was ripe for a growing Communist presence producing the Vietnam War, which spilled over into Laos and Cambodia. By 1975, all those countries were ruled by Communists, but conflict continued, the most infamous of which was the Cambodian genocide by the Khmer Rouge.

Today, the region is a dichotomy of success and failure.

The tiny nation of Singapore boasts the richest economy and safest environment in which to live, followed by Brunei. Vietnam has had an economic boom (Utica College has had several students from there and recently tabled intentions to build a campus there). Measurable growth has occurred in neighboring Malaysia and Thailand as well.

At the same time the economic growth of Myanmar, Cambodia and Laos has struggled.

In Myanmar, where there are more than 100 ethno-linguistic populations, the military government cracked down on resistance from mountain tribes, including the Wa, Kachin and Karen population, forcing many to flee (some came to Utica and worship in our parish).

The 1991 Nobel Peace Prize winner Aung San Suu Kyi has been arrested several times, even after her political party has won democratic elections. Cambodia’s military government has been accused of keeping citizens in forced labor, using excessive force in killing hundreds of students in protest rallies and the executions of monks and citizens.

Even Mother Nature has been unkind to Myanmar. In 2008, more than 130,000 people were killed during Cyclone Nargis that brought 135 mph winds and massive flooding. The government obstructed relief efforts by the UN and other nations at unprecedented levels. Most recently, there has been a standoff between the people of Northern Myanmar and the government as they refuse to work on the Chinese sponsored expansion of the valuable copper mines there.

Those who fled that region in hopes of a better life for themselves and their children are counting on Utica and its diverse population. Hopefully, the warmth of our parish and its parishioners will make these new brothers and sisters in Christ feel welcome and safe.