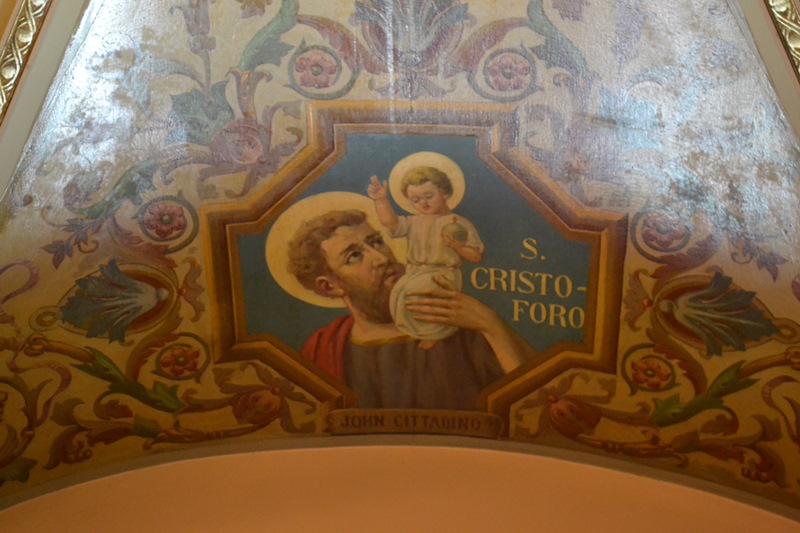 In this installment, we will examine the images found on the vaulting of the nave on the east side (Mohawk Street side) of our beloved church. There we will find the painted portraits of 22 saints and popes depicted through the benevolence of faithful parishioners whose names appear below the pictorial medallions.

Pope Alexander VII (1599-1667 / pope 1655): Located on the first cross vault just in front of the altar of the Sacred Heart of Jesus, and the location of our tabernacle. A sickly child of Siena’s prominent Chigi family, Fabio Chigi was home-schooled as a child but later demonstrated his brilliance by obtaining degrees in philosophy, law and theology. He began his papacy as Alexander VII by rejecting any semblance of nepotism and the advancement of his own family, but as the job got more difficult, he turned to relatives for help who eventually took advantage of their positions for personal gain. Highlights of his tenure were the conversion of Queen Christina of Sweden, the beautification of Rome and the Vatican (such as the famous colonnade of St. Peter’s Square and the modernization of the University of Rome.

San Gennaro: The patron saint of Naples. He was the bishop of Benevento in the 4th century and was known for his defense of the faithful during their persecution by the Roman Emperor Diocletian. After several attempts at torture and death at the hands of the Romans, he was beheaded in the town of Pozzuoli. His remains are kept in the cathedral of Naples, as are two phials of his crystalized blood that miraculously liquefy on his feast day, Sept. 19. He is credited with saving the people of Naples in times of plague, volcanic eruptions and war.

Pope Pius IX (1792-1878 / pope 1846): Formerly known as Giovanni Maria Mastai-Ferretti. Much beloved of the people for his wit, work with orphans and his ability to defuse conflict between the Italians and their Austrian invaders, he became the leader of the church and led it through the Italian Risorgimento, a period when the papacy lost most of its temporal property on the peninsula. Because of his preference to settle political issues peacefully, he was accused by some as a traitor to his country. His reliance on French and Austrian soldiers in maintaining the peace in Rome furthered those cries. In 1854, he proclaimed the Immaculate Conception as church dogma. He also promoted the devotion of the Sacred Heart, and for this it is fitting that his image be so close to the altar at the front of the nave.

St. Christopher: Although the earliest images of this man date back to the 6th century, there is no concrete history of his existence, only legends. Scholars say he probably was an early Christian martyr. The legends say he was a pagan prince who rejected a king, who was afraid of the devil, and the devil, who was afraid of the cross. A hermit instructed him in Christianity. Rather than fast and pray, Christopher carried people for God’s sake across a stream. One day he carried a child who became heavier and heavier until it seemed he had the weight of the world on his shoulders. It was then that the babe revealed that he was the Creator and Redeemer of the world.

Pope Pius VII (1742-1823 /Pope 1800): The son of northern Italian nobility, Barnaba Chiaramonti rose quickly in the church through family connections. His, however, was one of those cases in which the man truly was worthy. He was responsible for peaceful resolutions to foreign aggression on Italian soil. He was elected as Pope Pius VII after a three-month conclave when the warring political factions within the college refused one candidate after another and finally deferred to him. His reign was plagued by tempestuous relations with the church in France, Napoleon. He was, however, favored with good rapport with the royal houses of Austria, Naples, Prussia, Savoy and Spain. He also was a patron of the arts and letters.

St. Louis Gonzaga (1568-1591): At the age of 8 he was placed in the court of Francesco de’Medici of Florence and within two years moved to the court of Mantova. He received his first communion from St. Carlo Borromeo. Eventually, he became a page in the court of Prince James, son of the king of Spain. Though being groomed to be a warrior and nobleman, his heart was not in it. With great difficulty, Louis got his father’s consent to renounce his hereditary claims so he could become a Jesuit. He was a brilliant student but weak in health. Despite that he ministered to the ill during a great plague that eventually took his own life. He was canonized in 1726 by Pope Benedict XIII.

St. Cyril (376-444): As the Patriarch of Alexandria, he was a prolific writer and a leading figure in the debates in church doctrine during his time. He led the fight to depose Nestorius as Patriarch of Constantinople, at that time, the most important city in the western world. He holds many titles as one of the Church Fathers, a Doctor of the Church, Pillar of the Faith and Seal of all Fathers.

Pope Paul V (1550-1621 / pope 1605): Once known as Camillo Borghese, Paul claimed to be a relative of St. Catherine of Siena and was a man of uncommon ability. He was made a cardinal in 1596 by Pope Clement VIII and became the Cardinal-Vicar of Rome. Trained in law, he held himself apart from Vatican politics, and when he became pope in 1605 was not beholden to any particular faction. In fact, one of the first things he did was to send to their homelands all prelates and cardinals who had been hanging around Rome for indefinite periods of time. He considered it their duty to stay in contact with their flocks. He was the pope who brought about the completion of St. Peter’s Basilica after a century of construction. He canonized important saints such as Charles Borromeo, Frances of Rome, Ignatius Loyola and Francis Xavier. He was a staunch defender of Catholicism in a period when there were conflicts within and from without the institution.

Pope Clement VIII (1536-1605 / pope 1592): Once known as Ippolito Aldobrandi. Following in his father’s footsteps he was an able jurist and used those talents as a cardinal-priest. He became acquainted with the Hapsburgs, the royal family of the Austro-Hungarian Empire, and successfully negotiated the release of Archduke Maxmillian after his unsuccessful bid for the Polish throne. His candidacy as pope was seen as a way to release the church from the clutches of the Spanish throne. As pope, he rooted out abuses and enforced discipline among the clergy. He convinced Henry of Navarre to convert from Calvinism to Catholicism to become king of France, thus putting an end to the 30 Years War in France and gaining an ally for Italian independence. He successfully negotiated peace between France, Spain and Savoy and battled corruption among the Roman aristocracy.

San Cosma: One half of the twin saints who are celebrated each year in our city on their feast day in September. Sts. Cosmas and Damian were twin brothers born in Arabia. They were physicians who ministered to the poor without recompense. During the persecutions of the Christians under the Roman Emperor Diocletian, they were tortured and beheaded. After their deaths on Sept. 27, 287, many miracles were credited to their intercession. They are considered to be the patrons of physicians and surgeons.

Pope Innocent X (1574-1655 / pope 1644): Giambattista Pamfili was a son of a noble family of Gubbio and Rome who received a degree in law by the time he was 20 years old. He put his legal prowess to work for popes for Clement VII, Gregory XV and Urban VIII. He traveled to France and Spain and was Latin Patriarch of Antioch. His candidacy for the papacy was seen as a compromise to the French block that would not support anyone favorable to their national enemies, the Spanish. As fate would have it, Innocent conflicted with the French over their protection of the Barbarini family, which was accused of misappropriation of funds. Innocent also dealt severely with the Duke of Parma over his refusal to carry out the terms of a treaty and his refusal to recognize papal appointees. This resulted in a military action and the papal takeover of the duke’s territory. By allying himself with the Venitians, he was able to appoint clerics throughout their dominion. He never recognized the country of Portugal when it seceded from Spain. He was accused of being too dependent on the council of his sister-in-law, which caused some to whisper of the type of relationship they had. Historians, however, reject those accusations as slanderous.

San Leopoldo (1866-1942): Little known today, he began his life as Bogdan (Adeodato) Giovanni Mandic in Castelnuovo di Cattaro in Dalmatia. He took the name Leopoldo when he took on the habit of the Capucin friars in 1884. He was ordained in 1890 in Venice. He was best known for his compassionate administration of reconciliation and his promotion of the unity of the Catholic Church and the Orthodox Church. For this reason he is considered to be an apostle for ecumenism. His long years in religious service were only interrupted by two years as a prisoner of war (1917-1919).