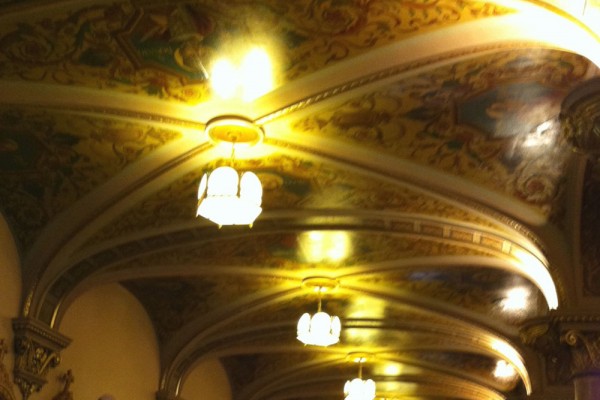 Second in a series. Watch for the next installment in the summer issue. Click here to read Part 1.

In this issue, we dedicate ourselves once again to the images that grace the vaulting of the western nave (on the right side of the church as you face the altar).

Between the ribs of the vaulting, are the portraits of 22 popes and saints.

Who were these people?

We continue in this issue with the fourth through sixth cross vaults in the middle of the ceiling in from of the St. Joseph altar:

Santa Teresa del Bambino Gesù (St. Teresa of the Child Jesus or St. Thérèse of Lisieux, b. 1873 – d. 1897): Marie Françoise Térèse Martin became a Carmelite nun at age 15 and died of tuberculosis at 24. In her brief life she wrote extensively, leaving an autobiography, prayers and even plays. She was beatified in 1923, canonized in 1925, declared a patron of missions in 1927 and the co-patron of France with Joan of Arc in 1944. In 1997, Pope John Paul II declared her the 33rd Doctor of the Church, the youngest of all and the third woman to achieve that honor.

Pope Gregorio XV (Gregory, b.1554 – d. 1623): Pope from 1621 to 1623. Before becoming a bishop there was no record of his ordination. He was trained in canon and Roman law and was for a time a papal jurist. His family benefitted mightily from Gregory’s papacy, but so did the church. He was the founder of the Congregation for the Propagation of the Faith. He established the use of the secret ballot in papal elections. He canonized such popular saints as Teresa of Avila, Francis Xavier and Ignatius Loyola.

Pope Pio VI (b. 1717 – d. 1799): Pope from 1775 to 1799. He received his doctorate of law in 1734 and took on many cases in defense of the church. He didn’t become a priest until 1766 and almost immediately became the treasurer of the camera apostolica. He did his job “too well” and was rewarded by a position that kept him out of the heart of papal affairs for a few years. Eventually, he was redeemed and rose to the papacy in 1775. In his time, his extravagant efforts to re-establish the grandeur of Rome came under attack. He is responsible for establishing the Vatican Museum. He was extremely unpopular in France during the French revolution, as the church was seen as an oppressive temporal power.

San Rocco (b.1295 – d. 1327): Though born of a wealthy family, he gave his worldly goods to the poor. He ministered to the sick during the great plague of his time and is said to have given many miraculous cures. He was stricken with the disease and was forced to live in a forest alone. A dog of a local nobleman brought him bread and by licking Rocco’s wounds healed him. He is the patron of those afflicted with pestilence and is patron of the city of Potenza in the Basilicata region of Italy.

Pope Leone XII (b. 1760 – d. 1829): Pope from 1823 to 1829. A handsome and articulate person in his youth, he was a diplomat for the Vatican to France, Switzerland, Germany and Austria. Upon becoming pope, his reign was very tempestuous. His religious policies were admirable but at times his finances were out of order. He took a strong position on the Inquisition. Many Jews chose to leave Rome or live in ghettos and free masonry was condemned. In taking the high ground in education (all secondary education was in Latin) and morality (he even passed laws for the neckline standards of women’s clothing) he caused friction with the people.

San Giovanni Berhmano (b.1599 – d.1621): St. John Berchmans was a Jesuit priest from the Belgium and is the patron saint of altar servers. From the time of his youth he was the type that returned two-fold, kindnesses given to him. He had a brilliant mind, was dedicated to Mary and strictly adhered to the rules of his order and superiors. He was so beloved, that crowds continued to visit his corpse for several days before he was buried.

Beato (Blessed) Vincenzo Pallotti (b. 1795 – d. 1850): At the time the painting was placed on our ceiling this man had not yet risen to sainthood. That was accomplished in 1963. Pallotti devoted his life to working with the poorest people of Rome and was much admired by his contemporaries, including the pope. It was his desire to follow in the footsteps of St. Paul and try to save people all over the world. He founded the Union of Catholic Apostolate. He became the patron of Vatican II because of his works and fervent desire to unite the various factions of the church.

Pope Benedetto XIII (b. 1650 – d. 1730): Pope from 1724 to 1730. A member of the powerful Orsini family, he was the third of that group to become pope. As the Cardinal of Benevento, he regularly visited parishes and helped rebuild the city after a devastating earthquake. For this he is known as the Second Founder of Benevento. As pope, he tried to clean up lack of discipline in the clergy but was not universally recognized as an able leader in other realms. Many of his policies were administered by Cardinal Niccolò Coscia, his assistant whose mismanagement resulted in his own imprisonment upon the pope’s death. Under Benedetto XIII, the famous Spanish Steps of Rome were built and the University of Camerino was founded.

Pope Clemente XIII (b.1536 – d. 1605): Pope from1592 to 1605. An expert in law, he made friends with the powerful Hapsburg family, the rulers of the Austro-Hungarian empire by successfully negotiating the release of Archduke Maxmillian, who unsuccessfully claimed the Polish throne. As pope he established many schools. When Henry of Navarre came to the French throne, it was Clement who made him see the light, and Henry converted to Catholicism. He deftly dealt with the political friction in France and Spain ending a 30-year religious war and gaining independence of the Italian states. He fought courageously against lawlessness in Rome. He was respected for his intellect and diplomacy.

Pope Benedetto XIV (b. 1675 – d. 1758): Pope from 1740 to 1758. By the time he was 19 years old he had received doctorates in theology and law. He is considered to be one of the greatest scholars among the popes. He saw his elevation to high positions in the church not as honors, but rather as opportunities to do good deeds. As pope he successfully dealt with the royal houses of Europe who believed that it was their right to nominate candidates for bishops instead of leaving that to the church. In 1741, in his papal bull “Immensa Pastorum pricipis,” he condemned the practice of enslaving Native Americans and other people around the world. Benedetto also made rulings on how missionaries could accommodate (or not) Catholic beliefs using cultural references or words from native cultures.