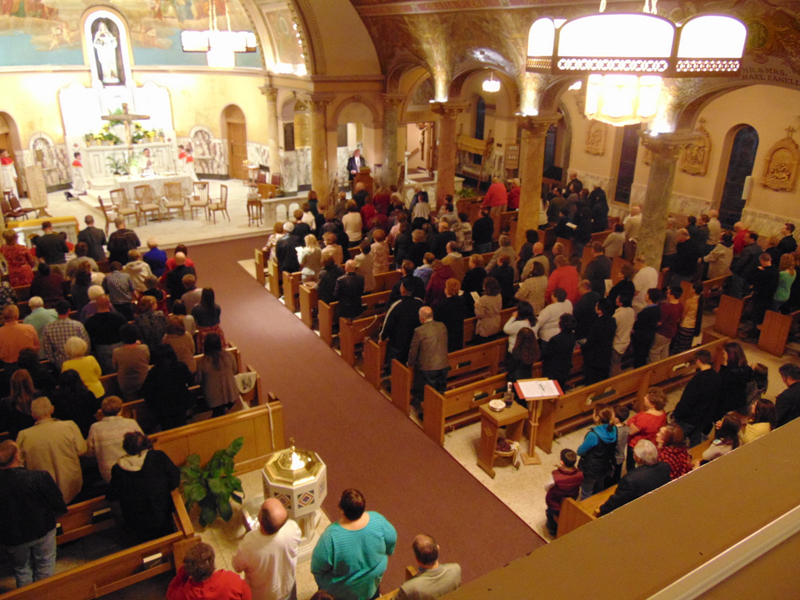 In an era when churches of all denominations are struggling to maintain and increase their flocks – including a congregation in Taiwan that just built a church in the shape of a giant glass high-heeled pump to attract women – our parish is doing well.

It is common knowledge that there is an attendance slump among the demographic of Christian 18- to 30-year-olds. In our own parish, I often see classmates and friends of my daughter, who are in that demographic, in the pews.

That is just one example of how vital the parish of St. Mary of Mount Carmel / Blessed Sacrament is. Let’s look at some of the statistics for 2015 and how it reflects the life of the congregation.

Last year, Mount Carmel included a population of 1,011 families, meaning of course, that the number of individual parishioners is more. That population was amplified with the baptisms of 63 children into our community. Hopefully, with the marriages of 18 couples during the year, we will continue to grow.

The spiritual life of a religious community can continue only if its children receive the appropriate instruction in the faith, and with that, assure their on-going commitment to the congregation.

A dedicated group of adults take on this responsibility. Last year there were 174 children in Faith Formation classes. Among those children, 13 made their First Communion in May and 14 young adults were confirmed.

Faith Formation directors Terri Panuccio and Anne Elacqua and crew go beyond classroom activities each year, raising funds and bringing some of the most promising youths to the annual Vision conference at the University of Notre Dame. John Reale, trainer of our altar servers, reports that there are about 30 children assisting Father Jim at Mass.

During the year, hundreds of parishioners roll up their sleeves for the various activities and ministries of the church community. Scores of individuals can be found setting up the July festival, frying peppers and sausage, making pizza fritta, running the rummage sale, operating games, displaying their musical talents, cleaning up and tearing it all down.

There are 59 people who serve as Eucharistic ministers. At weekend Masses, 43 parishioners share the Good Word as lectors. And the voices and instruments of approximately 50 people can be heard during various religious services. Our altar linens always are crisp and clean thanks to the 10 women who launder, press and drape them.

During any given year, certain projects must be undertaken to maintain the structural and aesthetic value of the parish campus.

In the past we have seen renovations to the former school building and rectory. Two years ago we watched as the beautiful artwork of the interior of the church was restored by local artist Serafina Vetrano-Gape and her husband, Bill.

Recently, the HVAC system was attended to. In 2015, roofing was replaced and a new organ was installed. All of that work takes commitment by the Parish Council and its pastor.

One full-time custodian and other volunteers help to keep the campus tidy and in shape. Even Father Jim has contributed his gardening skills.

Mount Carmel’s reach goes beyond its campus in many ways. Lay ministers visit the sick and elderly, bringing Communion and appreciated company. Holiday drives bring gifts and treats to the less fortunate. A nurses group conducts several blood drives through the year. Flowers are brought to patients in nursing homes. Volunteers help at places such as Hope House and Mother Marianne’s Kitchen. Several parish societies still are involved in parish life.

Life, as we know, is a circle. A responsible parish and its pastor tend to the needs of its congregation from its alpha to its omega. Sadly, there were 102 funerals during the course of 2015. Father Jim, assisted mostly by adult funeral servers, gave comfort to the living and an appropriate sendoff to the eternal reward of the deceased.

The Bereavement Committee composed for seven members helps with the ceremony and related functions, while another group of seven helps organize funeral lunches following services.

Often, our pastor is called to the bedsides of the sick approaching their end. It is a difficult job staying strong for those who are at their weakest point, but with the support of a concerned and committed priest and the on-going love of a parish, even this passage can become less terrifying and one can pass peacefully into the night.