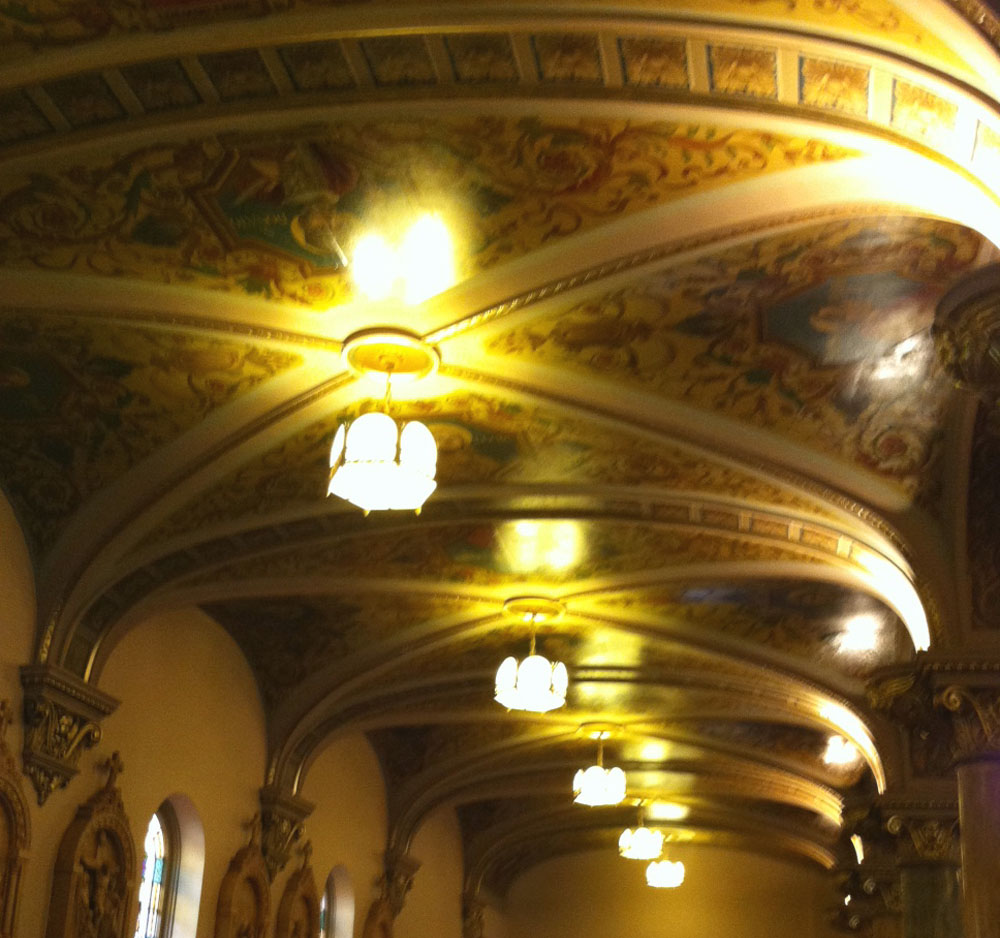 First in a series. Watch for the next installment in the spring issue.

In the past, this column has explored the history of our building as well as some of its artwork. In this issue, we dedicate ourselves to the images that grace the vaulting of the western nave (on the right side of the church as you face the altar).

Between the ribs of the vaulting, imbedded in the grotesque-style decoration (in art, that doesn’t mean ugly, it means a type of decoration used on the ceilings of ancient Roman buildings) are the portraits of 22 popes and saints.

Who were these people?

If we start at the first cross vault nearest the St. Joseph altar and work to the back of the church, we will encounter the following images:

Pope Pio XII (Pius in English) – b. 1876 – d. 1958: Pope from 1939 to 1958. In 1933, as cardinal secretary of state of the Vatican, he made a concordat with Germany to protect the church against Nazi fascism. In recent years his “silence” during the Jewish Holocaust has come under intense scrutiny. The church did, however, protect many European Jews from slaughter.

Santa Rosalia – b.1130- d. 1160: Rosalia is patron saint of Palermo, patroness of Sicilian mariners. Though a descendant of Charlemagne and well off, she rejected the material world and became a hermit on Monte Pellegrino, overlooking the city of Palermo, where she died. In 1624, her remains were found during a plague. When her remains received a proper burial and paid due honor, the plague ceased.

St. Tomasso D’Aquino (Thomas Aquinas) – b. 1226- d. 1274: A “doctor” of the Catholic Church, he is considered the greatest of its theologians and philosophers. In examining classic and neoplatonic thought, he developed Christian doctrine. He noted that prudence, temperance, justice and fortitude as cardinal virtues are revealed in nature, however, the theological virtues of faith, hope and charity are expressions of faith and directed toward God.

Pope Pio XI – b. 1857 –d. 1922: Pope from 1922 –1939. As Pope during the rise of Nazism and Communism, he declared those two movements as demeaning to human dignity and a violation of human rights. He accused the democracies of the west at that time as a Conspiracy of Silence for their lack of support in his protests against persecution of the church in places such as Spain, Mexico and the Soviet Union.

San Donato: An early Christian, his family was persecuted in Rome. Left an orphan, he came under the wing of the Monk Ilarino of Arezzo. He became a priest and was credited for many healings and miracles even before he rose to be bishop of Arezzo,

Pope Benedetto XV (Benedict) – b. 1854 – d. 1922: Pope from 1914 to 1922. Proclaiming World War I “the suicide of civilized Europe,” he declared the Vatican neutral in hopes of negotiating peace. Rejected by the warring factions, his papacy concentrated on humanitarian aid to the afflicted in the conflict.

Pope Pio X – b.1835 – d.1914: The only pope of the 20th century to have had much experience at the pastoral level. He was a plain-spoken man who did not curry much affection from aristocrats. He promoted religious instruction in the vernacular and a lifestyle of Christian virtues. Under his administration the first Code of Canon Law was assembled in one volume.

Santa Lucia – b. 283 –d.304: St. Lucy was from an aristocratic Roman family and a Christian martyr. She refused to marry a pagan and gave her dowry to the poor. She was condemned by the Romans to be a prostitute but, of course, she refused. Unable to move her or burn her, the governor of Siracusa, Sicily, had her eyes gouged out and put to the sword. She is the patron of sight.

Pope Leone XIII (Leo) – b. 1810 – d.1903: Pope from 1878 to 1903. One of the longest reigning popes, his papacy is noted for its dedication to Mary and the rosary. He was at the same time an enlightened pontiff declaring that science and religion co-exist. He opened the Vatican Archives to bona fide scholars and re-founded the Vatican Observatory. He was the first pope to make a sound recording or a movie. He succeeded in bringing back the luster of the papacy after the fall of the Papal States during the unification of Italy.

Sant’Antonio: There are two St. Anthonys: the first lived in Egypt (251-356) and the other, more familiar one, was born in Portugal in 1195 and eventually settled in Padova, where he died in 1231. He is known as the patron of lost things and missing people. Because of his extensive travels he also has become a patron of travelers. Early in his career, he did missionary work in Morocco but when he relocated to Padova he became known for his oratory and was commissioned by the Vatican to write a series of “Sermons for Feast Days.” In 1946 he was proclaimed a Doctor of the Church.

San Marcellino (Marcellus): There are three San Marcellinos. The first was pope from 296 to 304 during the early Christian persecution under the emperor Diocletian. The second Saint Marcellino was a great friend of St. Augustan and a martyr of the 4th century in what now is Tunisia. The third was a martyr from Piedimonte d’Alife in the province of Caserta. Given our parish’s long history with the Italian-American community, it is probably the later whose image is on our ceiling. There also is a town called San Marcellino.

Pope Leone XI – b.1535 –d.1605: Pope in 1605. Born Alessandro Ottaviano de’ Medici, he was a member of the extended ducal family of Florence. The Grand Duke of Tuscany, Cosimo de’ Medici used him as his ambassador to the Vatican for 15 years. Prior to becoming pope, Clement VIII sent him to France where he helped wrest the influence of the Huguenots at the court of Henry IV and strengthen the power of the Church in France. It is said that due to his work there and to the fact that the queen of France, Maria de’ Medici, was his relative that the king contributed heavily to ensure is eventual elevation to the papacy. Almost immediately upon assuming the papacy, he became ill and died within a month.