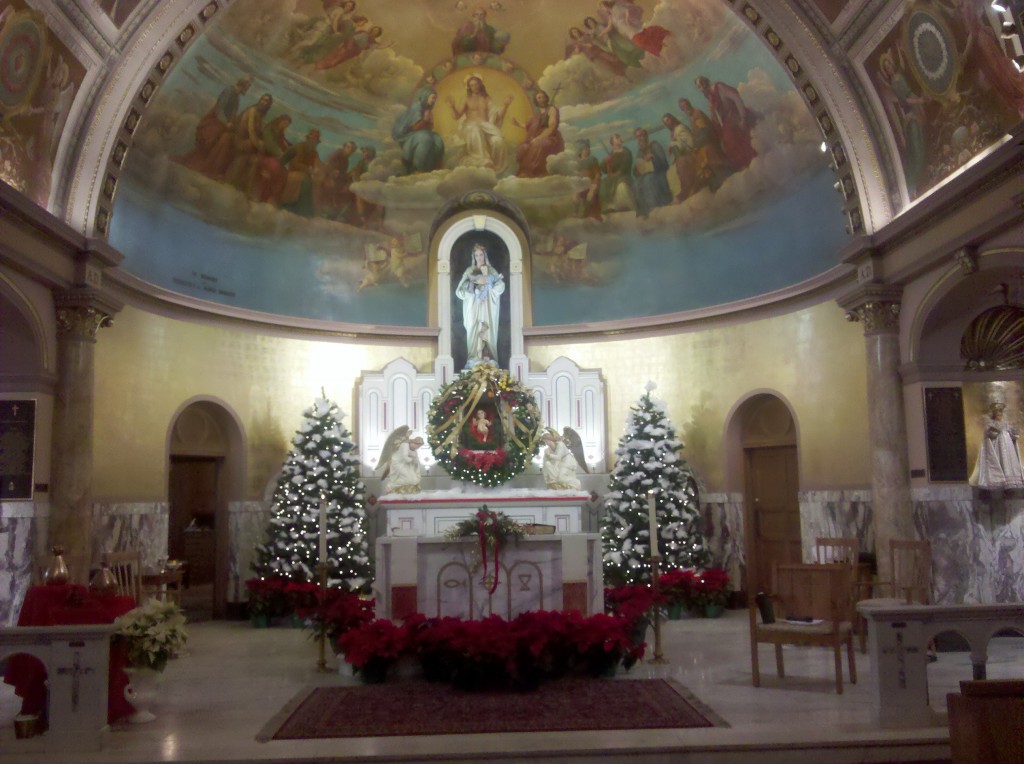 I remember the first time I stepped into St. Mary Mount Carmel Church back in the mid ’70s. There was a certain “familiarity” about it.

It certainly wasn’t because of the parish I had just left in suburban Albany (St. Pius X), whose building had just been completed in that minimalist A-framed ribbed modernistic style so prevalent in that era (see St. Mark’s in North Utica).

No, I rather think it was the kinship to my childhood parish in Cohoes, St. Rita, a building which no longer exists, but nonetheless built with the same religious fervor of Italian immigrants that gave shape to the Utica house of worship.

In addition to those memories, I still held fresh the familiar sights of Rome (Italy) where I had the privilege of studying for a year. While my classmates were off on excursions to other cities and European countries (they had the benefit of finances that were beyond my reach), I was tramping the streets of the ancient city visiting ruins, excavations, museums and churches.

Now everyone knows that Rome is a city of churches and “basilicas,” and stepping into St. Mary Mount Carmel/Blessed Sacrament was like stepping into familiar territory.

What is a basilica?

Though today basilica is a title given to Roman Catholic churches granted certain ceremonial rights, originally the basilica was a Roman construction built for public meetings, tribunals and or business. It housed a covered area consisting of a large central space, or nave, divided from two lateral naves by rows of columns. At one end of the central nave was an apse, a semi-circular construction created by spinning an arch 180 degrees.

When the emperor Constantine granted freedom of worship to the early Christians in 315AD, the first buildings to house public prayer were some of the old Roman basilicas. They were perfectly adapted to Christian rituals. The altar was placed in the apse where the magistrate once sat on his cathedra, a chair of honor (and the root of our word “cathedral”). The apse also provided a means of bouncing the sound of the celebrant’s voice to the congregation before him (kind of like a modern day band shell).

Mount Carmel’s interior not only follows that canon, it resembles one of my favorite old Roman basilicas, San Pietro in Vincoli, so named for the reliquary containing the chains that held St. Peter captive set below its altar.

What reminded me of this old basilica, the first to be dedicated to a relic and not a saint (5th century), was the similar barrel vaulted central naves, cross-vaulted side naves and columns (in the case of St. Peter, recycled ancient Roman, and here at Mount Carmel, plaster ones made to look ancient).

Whereas St. Pietro in Vincoli houses Michelangelo’s statue of Moses, we house, as was noted in a previous edition of this publication, statues of the patrons of various towns of the ancestors of our parishioners.

So how did our lovely church evolve into the beautiful building we have today?

Prior to its existence, the Italian community worshipped at historic St. John’s Church. In 1895 a lot was purchased between Catherine and Jay Street and the architect A.J. Grenier was hired for a sum of $150 to design a building.

Work began in April of 1896, but by June of that year work was halted, some say because of personality conflicts, others say because the entire building was projected to cost $11,000 and $7,000 already had been spent on constructing the basement.

Even with a $2,000 increase in the budget granted by the bishop, there was barely time to weatherproof and furnish the basement for worship by winter.

With generous donations from the Irish community and modest profits from suppers, picnics and charitable contributions, the parish continued in this fashion until in 1900, under Pastor Antonino Castelli, a $10,000 loan was procured from the Utica Savings Bank to construct the upper church.

On Sept. 15, 1901, Bishop Scalabrini of Piacenza, the founder of a society of priests and nuns who tended to the needs of Italian immigrants in the Americas, assisted in the laying of the cornerstone.

The choice of a single nave Romanesque-style structure fit well with the tastes of the time and with the heritage of the people it was destined to serve. On the practical side, the lack of excessive exterior ornamentation saved money in construction and in maintenance over the years.

Bricks were an obvious choice as they were economical, a continuation of a tradition as old as the ancient Romans who had perfected their fabrication and, in addition, many of the Italian immigrants worked in the local brick yards that made them. The church was opened to worship in June 1902.

By the arrival of the 1920s, the church was in dire need of repairs and enlargement. With a directive of from Bishop Grimes of Syracuse and under the guidance of then pastor Father John Marchegiani, who was known to roll up his own sleeves and apply his considerable construction skills, the vestibule was revamped, the altar was moved and the railing was moved forward.

The basement was reconstructed and waterproofed for a meeting space. Most importantly during this decade, the church was doubled in size by adding the two lateral naves and thus became a model of the ancient basilica-style house of worship.

In 1931 the Altar Society presented the sanctuary of the church with a beautiful Carrara marble communion rail and pulpit. The pulpit at that time was attached to the left side of the communion rail. Years later it was removed. Just this year another marble pulpit was constructed within the smaller arch on the left of the altar.

During the tenure of Father William Pizzoglio, the first great wave of artistic decoration of the interior took place. In addition to three new marble altars created by the DaPrato Company of New York, Prof. Antonio D’Ambrosio decorated the vault with beautiful religious paintings.

On Nov. 8, 1936, Bishop John J. Duffy came to consecrate the new altars and bless the decoration. Father Marcheggiani returned to Utica from Naples and the Italian Consul General came from New York came as well to mark the completion of the work and celebrate Father Pizzoglio’s contribution to a now outstanding testament to Italian artistry. In 1939 Father Pizzoglio installed a new organ.

By the time of its 50th anniversary (1946), Mount Carmel was under the direction of Father Guglielmo Pizzoglio, who with the encouragement of the Bishop undertook another revitalization of the building. With the architect Antonio G. Pace, structural and decorative symmetry were imposed on the many additions and modifications over the years.

Using Colonial Renaissance style as the uniting theme, the façade was changed by adding a vestibule, the smaller arches on either side of the apse were remodeled, the columns were replaced, the side chapels were enlarged and the ceilings on the side naves were renovated.

In addition, all of the windows were replaced and bear the images of devotional figures important to the parishioners. Donors’ names still are on the windows today. Again, Antonio D’Ambrosio was entrusted with the pictorial decoration of the interior supplying it with unparalleled beauty for an American house of worship.

Under Father Pizzoglio’s suggestion, the artist explored and depicted three themes: the exaltation of the Virgin Mary, patroness of the church (left side of the central barrel vault); the glorification of Jesus Christ (right side of the central barrel vault); and the Universal Church (the reproduction of a portion of Rafael’s “Disputa del Santissimo Sacramento” on the dome of the apse and the portraits of 44 saints and pontiffs on the vaults of the side naves). The cost of the decoration was $100,000 and was paid off in one year.

As a result of the changes initiated by the Second Vatican Council of the mid-’60s, the new pastor, Father Peter Bortolazzo, undertook the reconfiguration of the sanctuary with a new altar of sacrifice. Additionally, by the time of the 75th anniversary of the parish (1971), a new terrazzo floor was installed, new pews were obtained and new granite steps and restoration of the paintings.

In 1991, native son Father Joseph Salerno took the reins of the parish. In preparation of its 100th anniversary, he attended to some of the “creature comforts” we still enjoy today — air conditioning a remodeled choir loft, new wiring and new front steps.

Each generation, each pastor and changes within the Catholic Church have brought changes to our beloved building. Under present pastor, Father Jim Cesta, we have regained a marble pulpit.

Parishioners feel pride, a sense of continuity, ownership and a connection to their Catholic roots through the church. May it continue to thrive for hundreds of years.