Chapter 2 in a series on our parish history and its artwork. Today, meet Booz (aka Boaz).

Continuing our series on our parish history and art, we return to the arch over the altar of sacrifice.

In Chapter 1 in the last issue of “More Good News,” we learned about the first of the two characters on the left of the arch. In this chapter we will delve into the story of Booz, who is beside Isaiah.

Of course, to our ears, Booz may conjure up a notion of something liquid and entirely different from what the Italian fathers of our church intended. To alleviate that image, we will refer to that character by the English version of his name, Boaz.

Boaz comes to us in the Book of Ruth of the Old Testament. To get to him, we must go back before his introduction. In Book 1 of the story, a man called Elimelech brings his wife Naomi and his two sons to dwell in Moab because of a famine afflicting Judah. During the 10 years of their residence there, the boys marry Moabite women and Elimelech dies. For a while the sons take care of their wives and dear mother, but tragically both sons die, and the women are left to care for each other as they can. 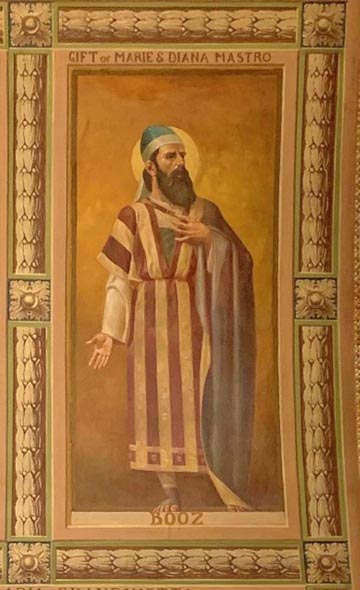 The daughters-in-law have local families to whom they can turn for support, but Naomi, who has no kinsman there decides to return to Judah. Ruth, one of the daughters-in-law, is so fond of Naomi that she accompanies her to care for her.

When they return to Bethlehem in Judah, the women are reduced to poverty. Boaz is a relative of Naomi. She asks Ruth to go to Boaz’s fields to glean for corn after the harvest as was allowed by Jewish law. Ruth agrees, goes to the field and encounters Boaz. She asks Boaz permission to glean and, pleased by her devotion to Naomi, he agrees and allows her to continue after the workday and even offers her water that his men have taken from the well. He also commands his workers not to touch her.

Naomi realizes that Ruth could continue to enjoy the protection of Boaz and tells her to attend the harvest celebration. At its conclusion she instructs Ruth to lie at the feet of Boaz when he falls asleep. During the night Boaz awakens to find the girl and asks what she is doing there. She requests that Boaz cover her with the skirt of his clothing as a “near relative.” In those days, it was the obligation of the nearest blood relative to care for a widow or destitute kinsman.

This pleases Boaz because Ruth could have gone to someone younger, richer or more attractive, but she came to him because of his previous generosity. He also knows that he is not her closest relative and promises, out of protocol, to go to that person on her behalf. If that person refuses, then he will help. In the meantime, he sends Ruth away with enough grain to provide for her and her mother-in-law.

So, the next day Boaz goes to the relative saying that Ruth has property she is willing to sell and wonders if the relative is interested. The relative jumps at the opportunity but Boaz has a caveat. If the relative takes the property he also must assume care of Ruth. The deal sours and the relative says he would be stretched too thin to assume that burden. Therefore, in front of many witnesses Boaz says he will be Ruth’s “kinsman redeemer.”

Boaz acted always as a compassionate man of honor. He always showed respect toward Ruth. He followed the rules of protocol. When others would not step up to the plate, he resolved the situation himself. He not only became Ruth’s “kinsman redeemer,” he eventually married her.

The Bible says that in redeeming Ruth, Boaz enabled Ruth to redeem Naomi better than seven sons (Ruth 4:13-21). Boaz and Ruth became the great-grandparents of David.

Boaz became a forebearer of Jesus and thus deserves to be a witness to his sacrament at every Mass said below on our altar of sacrifice.