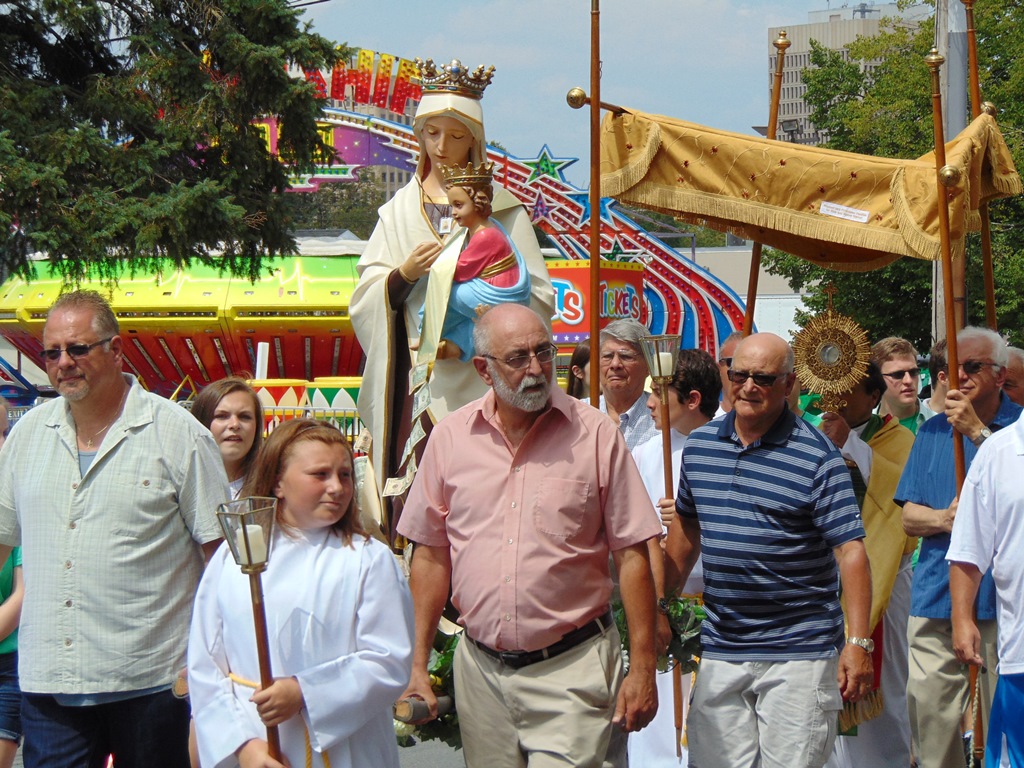 For Marge Hanrahan, volunteering and helping coordinate the annual Parish Festival in honor of Our Lady of Mount Carmel is a family tradition.

Marge, chairwoman of the Buona Fortuna raffle, has been at it for more than two decades. It’s also something she hopes and prays the younger generation will continue.

“My great grandparents worked on the first festival, probably small in scale but nevertheless, important, especially since we honor Our Lady of Mount Carmel,” Marge said. “This heritage has been passed down from my grandparents to my parents and now to me. As we become older, it’s important to know our heritage and tradition, and be able to pass it down to the younger people of our family.

“Hopefully, the younger people will be able to pass down the torch to their children and remind them of the many years that our beloved Mount Carmel Festival honoring Our Lady has been taking place. This would be my wish and hope for the young people of our parish.”

Another veteran is Terry Reale, the person who is responsible for the longest line during the three days of the festival – she coordinates pizza fritta.

Terry also believes the only way for the festival to continue its decades-long tradition is for the younger generation to step up and step in.

“This is the most important of all,” she said. “We must keep the tradition going. From the ‘secret recipe’ for our dough, the handling of the dough machine, the raising, cutting and shaping of the dough and frying, right on down to the sugaring and bagging is a process that’s unique to our parish and, hopefully, one we can continue to take great pride in.”

Jackie Mancuso Thibault has been working at the festival since she was a kid growing up in the Mancuso family. Her husband, Bill, has been associated with it for 38 years. Though they love what they do, they believe it’s time to pass the tradition on to a new generation.

“I know that I am continuing a tradition that my family has participated in for over 50 years,” Jackie said. “It’s like a big family reunion that is fun and exciting to see friends and family who are not always around. Our volunteer numbers are shrinking each year. We who volunteer are always looking to welcome anyone who is willing to learn and experience the excitement of our festival. If we do not have new and younger volunteers to find their niche for the weekend, who knows how long we can go on.”

Though it seems that way, the festival just doesn’t happen overnight. Planning begins for the following year nearly immediately after the festival ends. Serious preparation by the Festival Committee of about 15 to 20 volunteers starts a few months before opening night.

And unlike the thousands of people who enjoy the good food, rides and games, these hard-working people sometimes don’t get to do the same. But there is great satisfaction nonetheless.

Bill Thibault, who is the sound and music coordinator and also helps with setup and takedown, said he’s “satisfied that I helped my parish with a great fundraiser.”

He does, however, get a chance to be a “normal” person during the festivities.

“During the entertainment breaks, I wander about conversing with friends and eating great food,” he said.

Stephen Geary is in charge of keeping the beer flowing at the festival. He’s been at it for nine years. Despite the long hours, it does have its rewards.

“I enjoy seeing old friends,” he said. “I enjoy being part of the regulars that come back year after year and put the festival together. When the festival is going on I usually don’t think about eating until late and food is running out for the night. I rarely get to hear the live music playing. Aside from that, I enjoy Saturday night the most. That is the night all of my siblings, in-laws, nieces and nephews that can make it show up.”

MaryAnn (Mimi) Leone said she does find time to enjoy herself despite working in the café where she’s responsible for ordering pastries, setting up, decorating, recruiting volunteers, serving, being the cashier, boxing donated cookies and cleanup.

She’s also concerned about the festival’s future if younger people don’t step up.

“As time goes on, the current event planners will no longer be able to continue due to aging and health issues,” she said. “We need younger parishioners to start learning the ropes along with achieving a rewarding experience of giving. If this does not happen, the festival, which is a beautiful Italian tradition in Utica, may cease to exist within the next 10 years.”