For those old enough to remember, those Latin phrases were recited at Mass for years prior to Vatican II in the early 1960s.
“The Lord be with you. And with your spirit” is the strict translation. 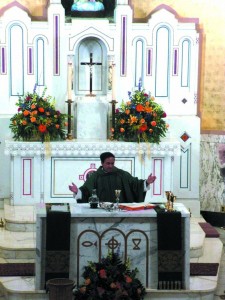 For the decades after Vatican II, the faithful have been responding to “The Lord be with you” with “And also with you.”

That’s about to change as the wording of some of the prayers at Mass takes a step back in time beginning on the first Sunday of Advent.

“We have experienced the sacred liturgy of the Mass in our language for 40 years since Vatican Council II,” Father Jim Cesta said. “Now comes some few ‘updates’ to more fully express the splendor of the prayers, sharpen the biblical images used and draw us more deeply into the meaning and mystery of the Holy Mass – and also to bring out some of the beauty and significance that was rooted in the older Latin translations.”

The most obvious change will be when the priest says, ‘The Lord be with you,” Father Jim said.

“The people will say, ‘And with your spirit’ instead of ‘And also with you,” he said. “It’s a bit more profound in carrying the message that the Lord and the Lord’s spirit is hopefully found in the priest and his ministry to the people of God.

“In other words, saying ‘And also with you’ is too much like saying, ‘Oh yeah, you too,’ like a greeting shared over the fence during a barbecue.”

The Msgr. James P. Moroney, in an article on the U.S. Conference of Catholic Bishops website, said the changes have been evolving over the past 10 years and started under the late Pope John Paul II.

On March 25, 2010, the English language edition of the Roman Missal with all the changes was enacted, he said.

Other changes, Father Jim said, are in the confessing of sin at the beginning of Mass and in the profession of faith after the homily.
“We will say, “Through my fault” three times to express humility and contrition, like the older Latin version ‘mea culpa,’” he said. “In the Creed, we will say now, ‘I believe’ instead of ‘We believe,’ not to hide in the crowd but make it a personal statement of faith the rest of the world says. ‘I believe,’ again, is closer to the venerable and more precise Latin Credo.”

And right before Communion is distributed, a change in the wording reflects on a biblical passage.

“The beautiful Gospel episode of  the Lord healing the Roman soldier’s sick child is expressed more exactly when we will pray before Holy Communion, ‘Lord, I am not worthy that You should enter under my roof, but only say the word and my soul shall be healed.”
Knowing that change sometimes can be difficult, there will be cards in the pews beginning the first weekend of Advent, Nov. 26 and 27, to help the congregation learn the new words.

“These changes in words used are looking forward to helping our prayer at Mass to be more spiritually rich and rewarding,” Father Jim said. “I do consider this a polishing up and thoughtful improvement on the most significant prayer we engage in – the Mass.  It will enhance the saving and splendid importance especially of our weekend worship together as the Catholic Church at prayer.

“Even more important, though, is the task of everyone to encourage our faith to be practiced and enjoyed by many more who should be with us but are absent now.”

HERE ARE SOME OF THE CHANGES
Here is the new wording to some prayers that will begin on the first Sunday of Advent:

> Glory to God in the highest, and on earth peace to people of good will. We praise you, we bless you, we adore you, we glorify you, we give you thanks for your great glory, Lord God, heavenly King, O God, almighty Father. Lord Jesus Christ, Only Begotten Son, Lord God, Lamb of God, Son of the Father, you take away the sins of the world,  have mercy on us; you take away the sins of the world, receive our prayer; you are seated at the right hand of the Father, have mercy on us. For you alone are the Holy One, you alone are the Lord, you alone are the Most High, Jesus Christ, with the Holy Spirit, in the glory of God the Father. Amen.

> Behold the Lamb of God, behold him who takes away the sins of the world. Blessed are those called to the supper of the Lamb …  Lord, I am not worthy that you should enter under my roof, but only say the word and my soul shall be healed.