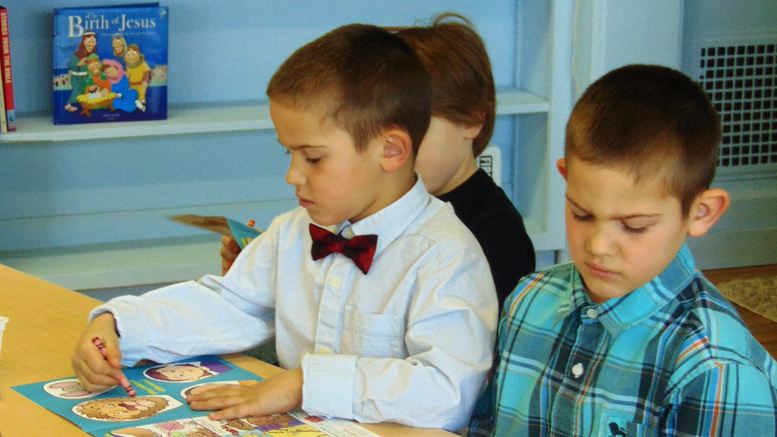 Choose whatever word you like and it describes what should be the relationship between the parish and parents in the religious guidance of their children in growing in the Catholic faith.

Teaching children about their faith is not just dropping them off for a one-hour Faith Formation class on a Sunday morning, picking them up and forgetting about it until the next Sunday. Just as those who teach your children for that one hour on Sunday morning have a responsibility, parents and guardians have an even greater role to play.

“The parents’ role is a very important one,” said Terri Panuccio, elementary school Faith Formation coordinator at Mount Carmel / Blessed Sacrament for the last seven years. “As they are told at their child’s baptism, they are the first teachers of our faith. It is up to them to lay a solid foundation for their children and show them, by their example, that God has to take priority in their lives. We are here to help and encourage them along their faith journey.”

And sometimes, that means difficult choices must be made by parents in choosing what is important.

Terri said her biggest challenges are “competing with sports like football, hockey, dance and cheerleading.”

“While sports and extracurricular activities are important for the children, that is not what gets them through life,” she said. “It is God and faith that will help them through whatever obstacles they will face in their lives. I think it would be great if parents got together with athletic directors and coaches to let them know there is a conflict so they could perhaps schedule games at a time that doesn’t conflict with religious education classes.”

Chris Vella is the father of four young sons, two of whom are in Faith Formation classes. His wife also volunteers as a catechist. Despite their hectic lives raising four children, they know what’s most important.

“First comes first,” Chris said. “You can play sports all week long — practice, games, whatever. Once a week, this comes first.”

Chris and his wife also recognize the importance of raising their children in the faith at home and in the parish by attending religious education and celebrating Mass together.

“The importance is to make sure my boys follow the same traditions we had when we were kids, when our parents were kids and follow the same religious beliefs we have be good to people, be nice, do the right thing,” he said. “And this is helpful on that path to learn the ideas about all of that. I went to Catholic school my entire life I learned this in school every day for 13 years. One hour a week … isn’t really enough but something for these kids beyond teaching at home.”

Mike Bova has two grandsons in first grade. He also stresses the importance of parent — and grandparent — involvement in sharing their faith, working in tandem with the Faith Formation program and, of course, going to Mass with the children and grandchildren.

“They have to get a base,” he said. “Just like elementary school, you have to start in kindergarten and go on through. We look at this as their base training outside the home.”

It doesn’t stop there.

“The responsibility is to not only get them here to class but also to discuss it outside the classroom so they understand why they’re here,” Mike said. “The one thing we like to do is we go to early Mass and bring the boys with us. Their mother comes and therefore they get to church and then it follows through into religion and there’s a tie-in there.

“Now, a lot of times the kids have conflicts. I think we do the kids an injustice if we pull up to the door, drop them off and drive away and come back in 45 minutes.”

Terri said there are 113 children in the elementary program, which has risen from recent years. One other major problem she sees is that children are sent to Faith Formation to receive their First Communion and then disappear until it’s time for Confirmation. After that, they vanish again.

“I think we have a lost generation and one that questions everything, which I’m not saying is a bad thing, but when we were younger, we didn’t need any kind of proof,” she said. “We followed the example of our parents and had a blind faith like they did, never really questioning, just doing. I believe the tides are changing and I am now seeing a generation of parents whose faith is important to them.”

Despite the conflicts of daily life, Terri is very optimistic and maintains a positive attitude.

“Being able to share my faith and love of Christ with so many wonderful children and families has truly been a blessing,” she said. “Because the Eucharist is so important to me, I especially love that I’ve played a role in so many children receiving their First Communion. … I really don’t think any church in our diocese has liturgies as beautiful and meaningful as we do. We are so blessed to be a part of such a loving and warm worshipping faith community.”