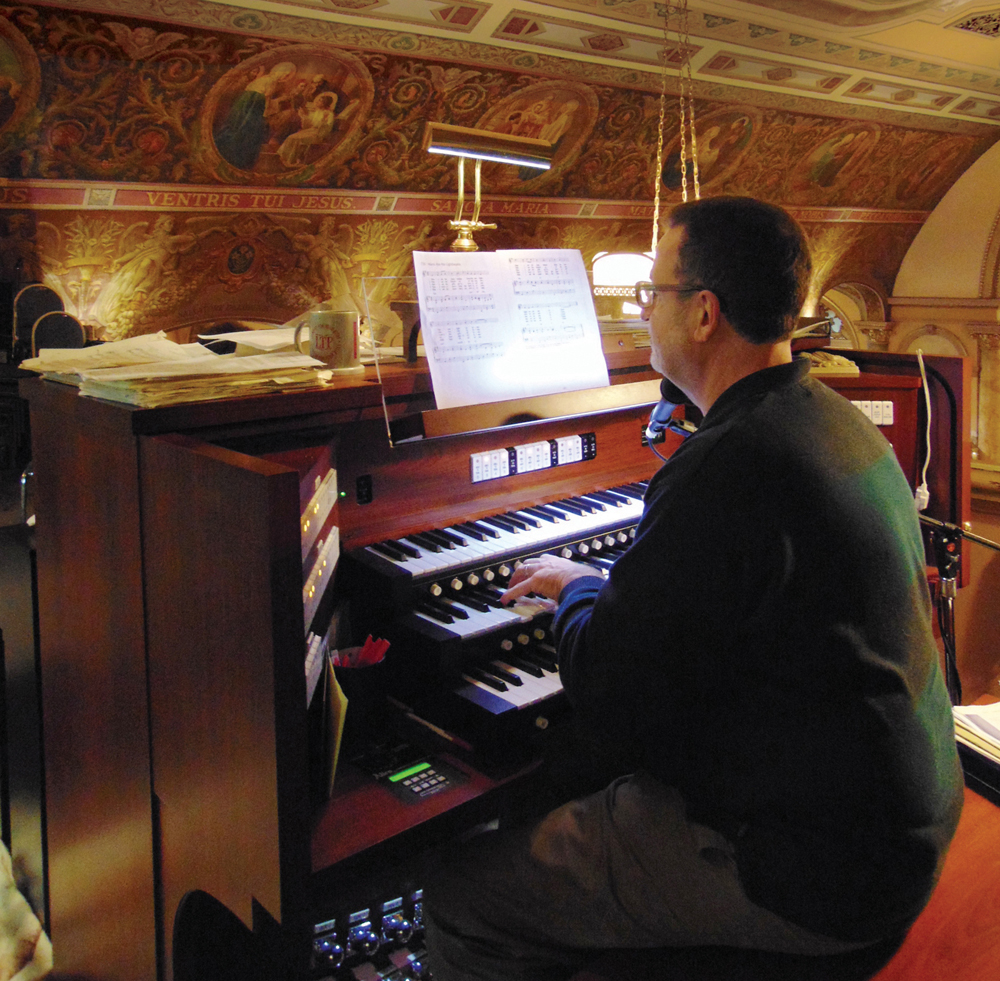 Throughout the diocese and beyond, St. Mary of Mount Carmel / Blessed Sacrament Parish is renowned for many things.

The beautiful church building with its glorious murals. Parishioners who give their time, talent and treasure to keep the parish vibrant. Priests who lead the people with intelligent decisions, prayerful liturgies, a kind word and even a sense of humor.

Then there’s the music. From Helen Ehlinger, to Donn Sullivan to Peter Elacqua, music has enhanced Masses and liturgies at Mount Carmel / Blessed Sacrament for decades. It’s a wonderful way to pray.

Now, the music ministry has been given a boost – a brand new organ for the first time in memory.

And those who play that instrument – Music Director Peter Elacqua, Anne Elacqua and Mollie Crumrine – are more than thrilled because it only can enhance the parish’s prayerful experience.

“When I first began as organist (back in 1979), the only organ I had ever seen at our church, I assume, was the original organ,” Peter said. “It had several ranks of pipes, and as time went on it became very expensive to tune and there were problems with the organ.”

So, a recommendation was made to purchase another organ.

When the Rev. Carmelo Negro was pastor, Peter said, he made a deal with another Scalabrini parish that had purchased an organ that was half pipe and half electronic, (a hybrid, so to speak). That organ lasted for about 10 years, but it also had increasing problems that cost a lot of money to tune and repair.

“When Blessed Sacrament combined with Mount Carmel, we were very lucky because the organ that was at Blessed Sacrament was relatively new — just about 5 or 6 years old — and we loved having it here,” Peter said. “Our problems were solved — no reason for tuning — it was entirely electronic, and the sounds from that organ were adjusted to accommodate our church space. That organ was wonderful.”

“It got struck by lightning a few years ago (through the electrical system),” Peter said. “The organ would just stop playing at times or would lose volume, or the pedals would not work. We never knew what would happen.”

For two years after the strike, damaged parts were replaced with second-hand or new parts.

“We did not pay for this gradual rebuilding until we were sure we would be able to salvage the entire organ,” Peter said. “In total, we put about $10,000 worth of parts in the organ, but we never reached the point where we were secure that it would be entirely all right.”

So, finally, it was time to put the organ out of its misery and get a new one.

“The organ company that helped us to rebuild the organ (Allen Organ in Albany) made us a wonderful offer,” Peter said. “They agreed to dismiss the charges for the revamping of the old organ if we chose to purchase a new organ.

“We met with Father Cesta and assessed the problem and decided that the new organ model we chose would be best for our present and future needs. The $10,000 fee for parts to the old organ was forgiven and we were able to purchase a new organ from parish funds and from the generous donations that people are making presently and that we hope they will continue to make in our future.”

For Anne Elacqua, playing the new organ only enhances Mass and other celebrations.

“At Mount Carmel / Blessed Sacrament, we are all about good liturgy,” she said. “I have played and attended Masses at so many other churches in our area and no one comes close to our liturgies. Our congregation sings and fully participates. It’s so beautiful. Mass without music is so empty.”

Anne has been part of the music ministry for more than 25 years. She started out covering funerals during the week when Peter was working. She was the organist and choir director at St. Agnes Church, retiring from there in 1997. Anne became an active choir member here, singing at Masses and special events. She still covers funerals during the week, sings in the choir and plays the organ or piano when needed.

Mollie Crumrine is the third member of the musical holy trinity. She’s been involved in music ministries since the early 1960s, serving in parishes locally, in the state and in North Carolina.

“When I returned to this area in 2004, I knew Mount Carmel was where I needed to worship, and Peter invited me to participate in the music ministry here,” she said.

“I have always felt blessed to be able to return to God the gift of music with which I have been entrusted, and in doing so serving God’s people,” she said. “It is exhilarating to participate in the creative and life-giving liturgies which we have here at Mount Carmel / Blessed Sacrament.”

Peter has been involved with music in the parish since 1967 when he was 13 years old. Nearly a half century later, he’s not tired of it.

“I love planning and playing for Mass at Mount Carmel,” he said. “Many people understand that the music choices are always influenced by the message of the readings. We don’t just sing songs because we like them; we sing songs because they help us to break open the words of the scriptures and the message of that particular day. Liturgical music speaks to our hearts and helps us to build our faith and our relationships with God and with others.”
And Peter feels extremely blessed to be part of the long tradition of music at Mount Carmel.

“We are very lucky because music has for a long time been a charism and a gift of our parish,” he said. “From our former pastor Father William Pizzoglio, who was a published liturgical composer; to Miss Helen Ehlinger, who dedicated her entire life to this ministry; to Mr. Donn Sullivan, who was in charge of the Sullivan Players (Syracuse) who brought a lot of Broadway musical knowledge to us; and through the presence of parish priests like Father Gino Marzola and Father Jim Cesta (who is a magnificent pianist), we have been blest in the parish because liturgical music has been such a major concern here.

“Liturgy here dynamically celebrates who we are as a Christian people and who we are becoming. We are so lucky and blessed to have parishioners who understand this and who support our program so strongly.”