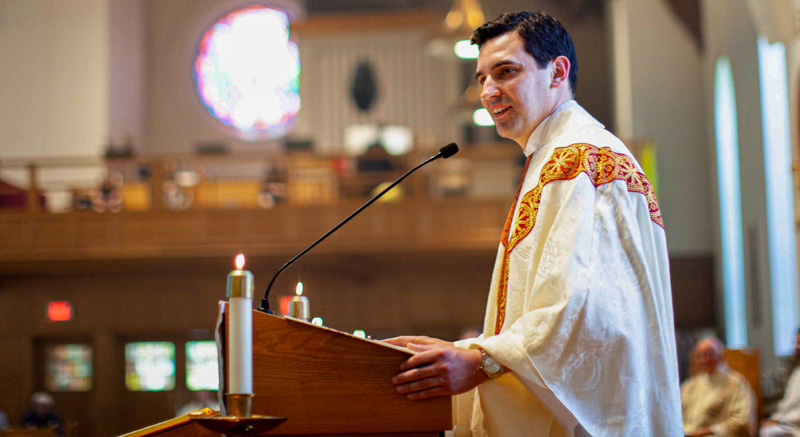 An interview with the Rev. Dennis Walker, who was ordained a priest in June 2021 and serves St. Rose of Lima Church in North Syracuse and St. Margaret’s Church in Mattydale.

When you were growing up, did you have any inclination you wanted to be a priest?

I didn’t really have any great desire to be a priest when I was younger. I really respected and revered priests in general, especially the ones I knew. But I never really considered priesthood until I was out of college.

Is there any one priest or person who influenced you the most?

There have been several, but especially two of my pastors from St. James Church in Syracuse where I grew up — Father Dan O’Hara and Father John Manno — and also Father Dan Muscalino, who taught at Bishop Ludden. They were present to the people whom they served and provided a real example of the priesthood for me.

When did you determine the priesthood was for you?

About a year after I graduated college, while I was working as an auditor, I felt a sense I might be called to serve the Lord as a priest. At my home parish of St. James in Syracuse, we were blessed to have three seminarians studying for our diocese. They were all around my age, they were all happy and they all had a sense of purpose and hopefulness as they studied to become priests. I saw what they were doing and thought to myself, “Maybe I should at least consider the priesthood or perhaps apply to the seminary?” It took a couple years of prayer and discernment before I applied and got accepted into seminary studies. But it also took a few years of study and discernment in the seminary to determine that this was what I believed the Lord was truly calling me too.

Do you think priests of your generation differ from priests of the past?

I think there are some differences. A few generations ago, it was far more common for young men to enter the seminary, and today it really is a rarity. Back then faith was something that was more or less assumed. Almost everyone went to Mass on Sunday. Someone ordained today has decided this call in a more secular world. But at least in our diocese there seems to be a great sense of fraternity between the older generation of priests and the newer generations.

Please describe what the priests were like in their approach.

The priest of today focuses heavily on evangelizing. Evangelizing isn’t merely preaching to those who aren’t Catholic or Christian, but it is more on educating and enlightening the people who already believe and help them come to a deeper faith and a closer relationship with Jesus. I’ve heard a few priests say that every moment is an opportunity for evangelizing. Something as simple as being present at parish and community events is an act evangelizing. The priest is the representative of the church and sometimes, just by his presence alone, he can make a difference. The importance of presence cannot be understated.

Were priests you grew up with any different from the priests of your parents’ generation?

Priests of the past didn’t face as much of a challenge of reaching people, since faith was assumed. In past times, people took the priest’s word as “gospel truth.” They had inherent authority in the public realm by virtue of their office. That is not the case anymore, just because we live in different times. Therefore, I think there was less of a need for priests to win over hearts as there is now.

In your lifetime, what changes have you seen in the priesthood?

In my life we have seen a decreasing number of active clergy due to a decrease in vocations. With the scandals that have hit the church in the last 20 years, it would seem at face value that the priesthood has lost some esteem in the public. I had some concern that I would be met with hostility by the public because I am clergy. But actually, it has been quite the opposite. I am surprised by the respect that the general public still has for priests. Many times I have been approached out in public by random strangers and thanked for saying yes to serving God’s people.

It’s a little difficult for me to say what has changed because I truly see every priest as different. They each have different styles, different personalities, different views. Some are very outgoing, some very reserved. Some prefer one type of clerical attire, others prefer another. But the heart of this calling is a love for Christ and love for his people.

Are these changes you noted for the betterment of the church?

The more our priests are oriented toward service, the better off the Church will be. During my time in seminary, I met a lot of good men who wanted nothing more than to serve the Lord and his people. As long as our priests remain devoted, the church can continue its mission to preach the gospel to all nations.

Of course, back then there were several priests to one parish. Now, it’s several parishes for one priest. What are your thoughts about that?

The early days of the Church in the United States are somewhat reminiscent of where we are today in the Northeast. Before the Church was really established, priests would ride from church to church on horseback to say Mass. They were very much missionaries, and I remember one priest whom I knew while I was in seminary considered himself as a missionary even as a diocesan priest. He considered himself as such because he knew that the bishop could call him at any time to take another assignment. Priests are really not meant to stay at one church for very long and that necessitates that they be adaptable. In terms of multiple parish situations, it is not ideal to serve more than one church, but our call as priests requires us to follow the example of the first apostles to cast into the deep waters. Personally, I have very much liked serving the two parishes I am assigned to. Both parishes are grateful to have a priest and I feel fulfilled by being able to serve these people.

How does your approach differ from the priests you knew?

Each priest has his own talents and abilities. My approach necessarily differs from others because of my own gifts and talents. For now, I am still a new priest and so I am taking time to learn how to best minister in my new role. I think my approach is to simply be available for my people: preach the word of God, provide the sacraments, educate and guide.

Do you feel priests are more approachable now than in the past?

In my lifetime, I’ve always felt that the priests were fairly approachable. Many of my priest friends are very personable and genuine and those qualities are quite valuable in our ministry. In recent decades, seminaries have put more of an emphasis on formation, especially human formation. Priests need to connect with a wide variety of people, and so seminaries are preparing their priests to be men of the people who have a heart for their people.

When many of us were growing up, the focus was more on guilt — you better do everything right or else. The focus was on obeying all the rules. How has that changed?

The focus of our evangelization efforts in our present time is to bring people into a personal relationship with Jesus. That has been the goal for a few decades now because merely following a set of rules does not make you a disciple. Now the focus is helping the faithful realize their need for a personal relationship with Jesus and the goodness that flows from this. If someone develops a genuine love of God, they will better understand the Church teachings and the beauty and wisdom behind them.

What are your biggest challenges these days?

Juggling the demands of ministry. There are a lot of demands for my time between two parishes.

How to you see the future of the priesthood?

I see the priesthood in the future being similar what it is today. We may have fewer priests in the future, but I am hopeful and confident that God continues to call men to serve at the altar in persona Christi. In light of the current culture which can be overly self-oriented, the call to the priesthood is a radical way of life that still attracts men who find a deeper meaning to life.