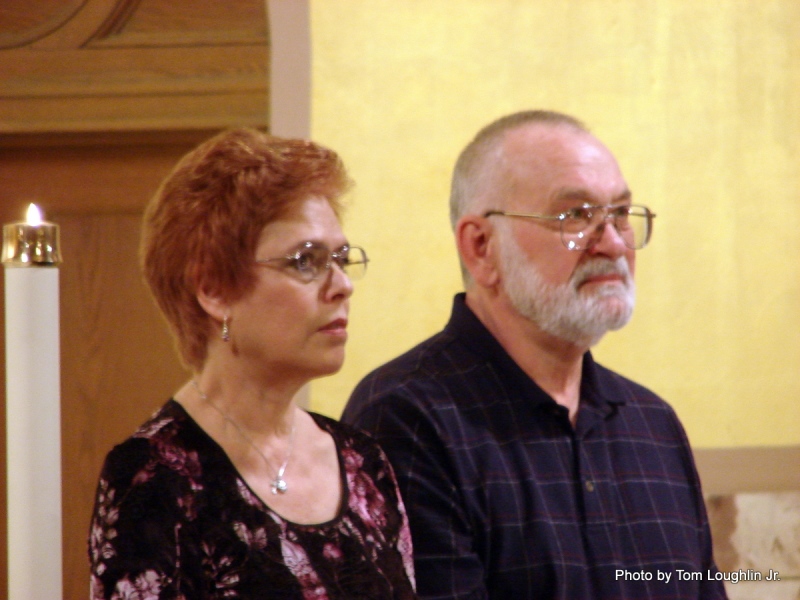 This series features people “In the Pews” at Mount Carmel / Blessed Sacrament that you see every weekend and might want to know a little bit more about.

How did both of you get involved with the parish?

I (Carmela) was born into the parish. I am the third of five generations at Mount Carmel / Blessed Sacrament. Bob became involved when we were married 26 years ago.

Bob, you became an official Catholic at the Easter Vigil. What was the impetus for you to consider converting and how did that thought process play out?

My wife and I worked together at preparing our sons for their sacraments and raising them in the Catholic Church. I took an active part in the process even though I wasn’t Catholic. As the boys became adults, I drifted away from the church and recently realized how much I missed being a part of the church. One Sunday, as my wife was leaving for Mass, I asked if she thought I would be able to sit upstairs in the choir loft with her for Mass. She assured me that I would be welcome and the experience that morning was so overwhelming that I continued to attend Mass every Sunday and Holy Days of Obligation. I think it was that first week back at Mass that I decided I wanted to become baptized and make my sacraments. After four or five months, my wife and I mentioned that fact to Anne Elacqua. We were immediately enrolled in the RCIA process with my wife as my sponsor. The “process” became a daily way of life for us. We attended the 8 a.m. Mass on Sunday and were dismissed to attend our RCIA session. We met with our mentor and friend Chris Bart for about an hour and a half each week and then attended the 10:30 Mass so my wife could fulfill her obligation for Mass and play with the music ministry.

Carmela, you were your husband’s sponsor. When he told you about his plans, what went through your mind?

I was thrilled. I never prompted him or pushed him to join the Catholic Church. I knew that when he was ready, it would have to come from him. I knew, however, that when he made up his own mind, he would entrench himself not only into the process but that he would pursue learning as much as he could to be the best Catholic and member of St. Mary of Mount Carmel / Blessed Sacrament that he could.

Both of you in May stood up in front of the congregation and detailed your journey of faith. I got the impression your life together has been reinvigorated. Am I close?

You are more than close! We both embraced the RCIA process with equal vigor. For Bob, most of the readings and discussions were new and exciting. For me, it was a revelation that there was so much more to learn. We entrenched ourselves into preparing for Mass, but also prayed together, read daily devotions and meditations and discussed them and how they related to us.

In what way has your life and marriage changed?

We continue to do these things on a daily basis, and even though life has its trials and tribulations, we are able to face things together and know that every day in the Catholic faith is a new day and a new beginning. We have been blessed by the Holy Spirit.

You also said that after years of marriage, you finally decided to have it blessed. Did you feel through all those years something was missing and why was it important for the priest to bless your union?

I don’t think we really thought that something was missing; however, because we were never married in a Catholic Church, it was an obstacle to Bob becoming Catholic. Father Jim very willingly performed a private but very meaningful ceremony and blessed us as a married couple with our children by our sides.

Finally, what advice would you give to new married couples (and us veteran married couples) about how to keep their marriage strong or to make it better?

I think the best advice that we could give to any new or veteran married couple would be to put God first in your lives. By beginning every day with God as the center of your lives, you will soon realize that you can face each day in a blessed way. Your combined faith will keep you strong and renewed. By participating together in Mass, devotions and meditations, you will continually be blessed with God’s gifts.